Students of Tokyo Tech High School of Science and Technology have brought the Tokyo Tech Museum and Archives to life for virtual visitors by creating a website that features 360-degree panoramic views of the facility's exhibits.

The creation of the website was proposed by the high school students after COVID-19 disrupted their plans for their own Culture Festival. The festival was cancelled completely in 2020, and was limited to research presentations by current students, visits from guardians, and limited online components in 2021. In 2022, when in-person contact was again restricted, students decided to create a 360° Panorama Cultural Festival website that offered online visitors a chance to participate in the event. These efforts, supported by the Tokyo Institute of Technology Fund, also included the 360° Panorama Museum, which opened the virtual doors of the Tokyo Tech Museum and Archives to the public. 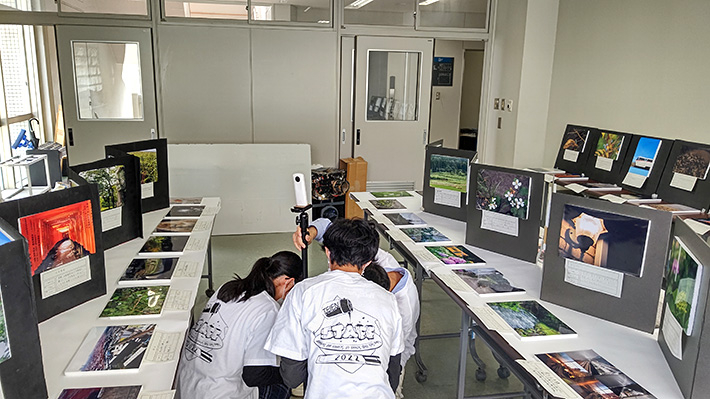 Preparations for the creation of the virtual museum website began during the summer break when the high school students toured Centennial Hall on Ookayama Campus and were briefed on the museum's exhibits. Among the various pieces of history on display, the Stirling engine, which was restored at Tokyo Tech High School of Science and Technology in March 1987, attracted plenty of attention. Perhaps due to this special connection with the high school, the students were particularly meticulous in photographing the engine with their 360° camera.

Stirling engine, which was restored at Tokyo Tech High School of Science and Technology in March 1987

After the images had been collected, second-year Information Systems students were responsible for creating a website based on these images. They also added some comments on the site. Third-year Information Systems students were also active throughout the project, offering technical support to the collaborative development team that had been created in September.

The 360° Panorama Cultural Festival website and the 360° Panorama Museum website will be open to the public until March 2023. While both sites are in Japanese, they are easy to navigate. On the cultural festival site, click on the pink boxes to view the efforts of each high school class. On the museum site, just click on any image to access a 360° view of that particular section of the museum.