This is an announcement of the subject ToTAL/OPEN program* "Creating and establishing new business to solve social issues in the field of social infrastructure" that is a part of "Professionals and value creation Ⅱ" of ToTAL course.

"ToTAL/OPEN Programs" are programs which are originally designed for ToTAL students that are also open to non-ToTAL students. Non-ToTAL students can: (1) apply to these courses (credits and GA will be granted), or (2) join each program on ad-hoc basis (credits will be not granted).

While aging social infrastructures, including road, bridges and water supply, which were built in high-speed growing era in 1960-70s has been progressed, decreasing number of masterful engineers and workers who have high level of skills becoming social issues.

Hitachi have been engaged in development of world highest level of sensors which detect water leakage of pipeline buried in the ground. During the lecture, I would like to introduce a development story about the sensor from the beginning; based on local voices raised by actual engineers and workers. Furthermore, it has been becoming a big issue that identifying exact location about various kind of buried pipes, such as water and gas. We are also engaged in developing new method for identifying such pipes by using radar in the ground and Artificial Intelligence (AI). Actual examples of new technology and new business will be introduced. 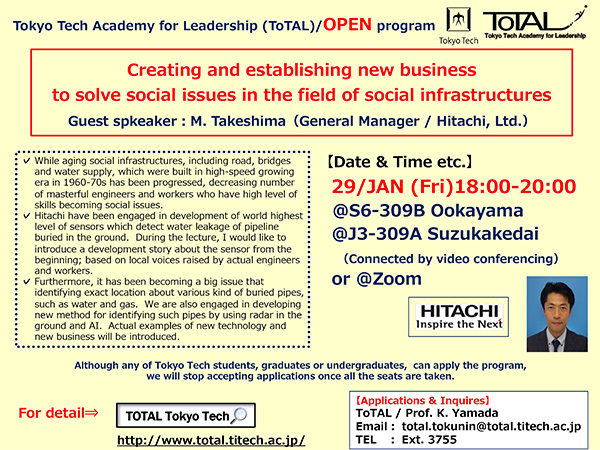