Department of Systems Design Engineering, University of Waterloo, Canada
*Prof. Hipel is one of the two recipients of JSPS Award for Eminent Scientists (FY2012 Awardee).

An integrative and adaptive design for Responsible Governance is put forward for addressing large-scale complex problems facing society based on a System of Systems (SoS) Engineering framework that reflects the values of stakeholders using a participatory approach and achieves desirable systems goals such as resilience, sustainability and fairness. To demonstrate that this can actually be accomplished in practice, Singapore is employed as a remarkable example in which the nation was purposefully designed according to sound Systems Engineering principles resulting in a highly respected country that brings prosperity, fairness and fulfillment to its citizens and serves as a beacon of hope for other countries to emulate. In contrast to Singapore's success, a range of tough interconnected systems problems are described for which systems solutions are urgently needed: the failed American financial system, unfair medical systems, unreliable aging infrastructure, self-induced climate change, preparing for extreme weather conditions like hurricane Katrina, fair trade and the electrical system collapse in North America. As is explained, the underlying cause for underperformance or system collapse in these large-scale problems is a faulty value system. Accordingly, ethical system values reflecting the values systems of stakeholders, including nature and future generations, constitute the solid foundations upon which Responsible Governance is constructed. Extensive research is urgently needed for developing a comprehensive theoretical structure for System of Systems Engineering for suitably solving current and emerging complex systems problems.

How to Attend and Inquiries

If you would like to attend the seminar, please send an email with your name, affiliation, position, and email address to: profhipel.at.tokyotech@valdes.titech.ac.jp
(The seating capacity for this seminar is 60 people.)
For any inquiries regarding this seminar, please contact Prof. Inohara and Ms. Segawa(profhipel.at.tokyotech@valdes.titech.ac.jp), IPCOB.

This seminar is supported by JSPS Award for Eminent Scientists. 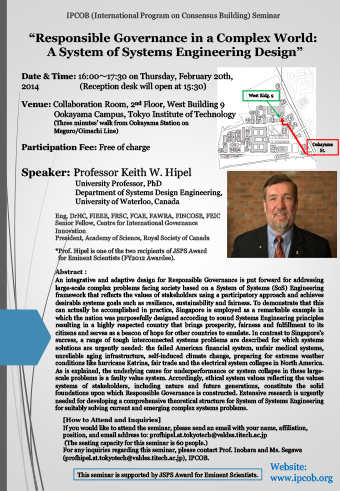