Lecture "Marie S Curie and Her Passion in Science."

Marie S. Curie (1867 – 1934) is one of the scientific legends of the 20th century. She discovered two radioactive elements Radium and Polonium. She was the first female Nobel prize laureate and, furthermore, was awarded the prize twice. However, it is less well-known that she was a great science educator, too. According to the biography, Madame Curie, written by Eve Curie, her younger daughter, Marie Curie taught children her original science lessons for two years (1907 – 1908). In 1907, the course of science lessons, "Leçons de Marie Curie," was organized for a few children in the age of 10. This course was called "cooperative lessons" and proved how innovative Marie Curie was as science educator facilitating young students to learn successfully. In her lessons she thought basic scientific logical thinking, how to extract essence from daily life phenomena and how to build a theory by the use of mathematical concepts. Among the students, Isabelle Chavannes (age 13) became later the world's first female chemical engineer. Irène Curie, daughter of Marie and Pierre, also received the Nobel Prize in Chemistry, which made them the only mother-daughter pair who have received the Noble Prize in 117 years of Nobel Prize history. Other students who participated in the lessons succeeded as scientists or government scientific officers. Although "Leçons de Marie Curie" were just 2-year cooperative lessons, Curie was contented that her students cultivated a scientific sense, where research led to discovery of principles by observation and investigation.

Mizue Y. Kissho is Research Fellow of Tokyo University of Science, Research Center for Math and Science Education and a Representative of Science Studio Marie (SSM). She holds a PhD in Science (Ochanomizu Univ.) and worked at the University of Cincinnati, the Tokyo University and the British Embassy in Tokyo. Her current studies are dedicated to the life and work of Marie Curie. She traces back the historical details with members of the Curie family in Europe and their influence in Japan. 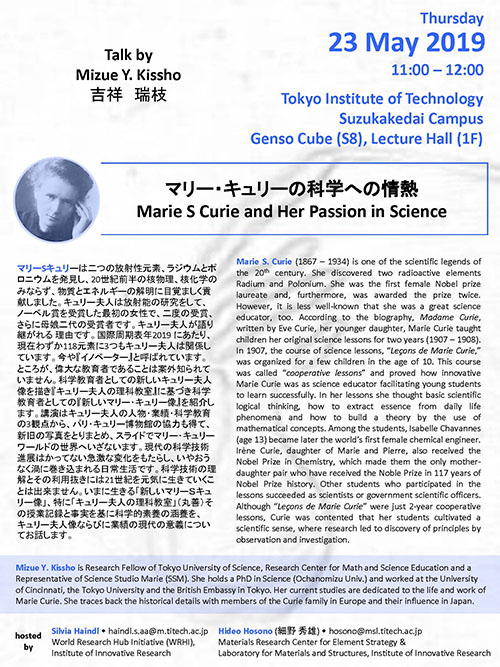