ToTAL presents: "My four-decade journey through the fascinating world of kanji and languages" - Lecture by lexicographer and polyglot Jack Halpern

At Tokyo Tech Academy for Leadership (ToTAL), we are honored to invite Jack Halpern, a renowned Japanese language expert and polyglot to speak at the 5th Global Leadership Cafe lecture series on Friday, December 2. The past four lectures were held entirely online due to COVID-19. This time, it will be held both in person and online for the first time. In his talk titled "My four-decade journey through the fascinating world of kanji and languages", he will mainly talk about his long fascination with kanji and the secrets of learning languages.

He will also talk about how he has been able to turn this passion for kanji and languages into several well-respected dictionaries for learners and technical dictionaries covering topics such as mechanical engineering, economics and medicine. Jack, who has studied 18 languages (speaks 11 fluently), is a lexicographer by profession. He was born in Germany and has lived in six countries including France, Brazil, Japan and the United States. After studying astronomy at university, he began a business offering technical translation services. He met a Japanese citizen who introduced him to kanji, became fascinated with it, and moved to Japan with his family in 1973.

Since then, he has lived in Japan for almost 50 years and has devoted several decades to the study of linguistics and lexicography. As CEO of The CJK Dictionary Institute, he has developed language learning software, and operates the company licensing large-scale lexical databases to many of the worlds top IT companies. He is also the founder of the International Unicycling Federation.

Please register from the form on Google Forms below if you wish to attend. Both in person and online participants need to register.

In person and online (Zoom)*

Zoom link will be notified to registrants.

Venue (for in person participants)

Capacity for in person participation: about 40 seats

Tokyo Tech students, faculty or staff, and the general public 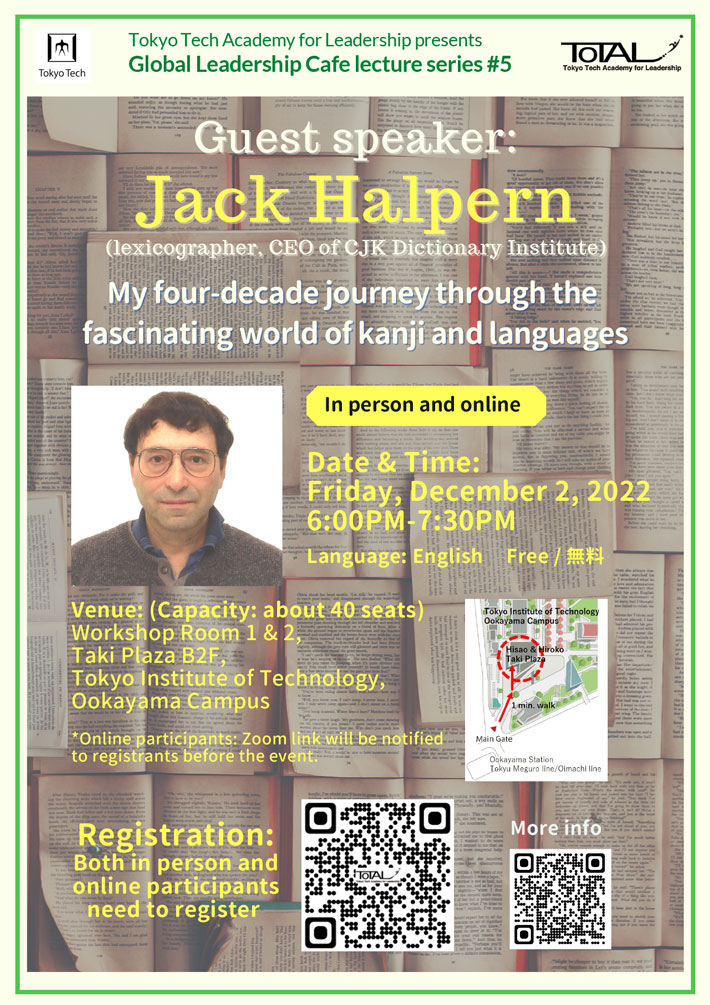