Tokyo Tech hosted the first ever EURAXESS Science Slam in Japan on October 16 in the Tokyo Tech Front building, Ookayama Campus. A "science slam" is a science communication event where young researchers compete to give the most entertaining presentation of their research to an audience of non-experts. The event is gaining popularity in Europe, particularly in Germany. 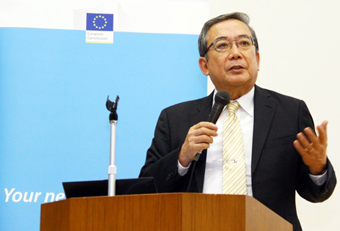 EURAXESS, an initiative of the European Commission that provides services to researchers around the world, organized science slam events in various countries including China, India, Brazil, North America and Japan. The winner from each event receives a trip to Brussels to attend the "Voice of the Researchers" conference in November.

With the large typhoon "Wipha" passing Tokyo just the night before, the organizers were concerned about attendance numbers, but nearly one hundred participants joined to watch the presentations and vote on the winner after group deliberation. The five talks by young researchers from all over Japan covered topics ranging from nanofibers through (appropriately, given the weather) "quantum typhoons", to the monitoring of the biological health of soils.

President Mishima opened the event with a speech encouraging the presenters and all those present to communicate their research, emphasizing the necessity not only in approaching the public, but also in pitching for research funds to non-specialists. This was followed by a speech by the head of the Science and Technology Section of the Delegation of the European Union to Japan, before the presenters each had a ten minute slot within which to impress the audience with their presentations given in English.

The winner of this first Science Slam was Ms. Mugiko Komatsuda, from The University of Tokyo, with her entertaining presentation on "How Physical Exercises Affect Obesity and Overeating". 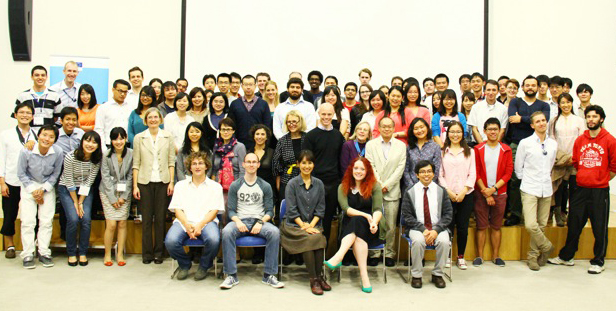 Tokyo Tech actively promotes communication of science and technology through various programs, including science cafes and an overseas internship where students can experience science communication overseas.