Associate Professor Yukio Kawano of the Quantum Nanoelectronics Research Center has been honored with the German Innovation Gottfried Wagener Prize 2014. The award ceremony was held on June 18. 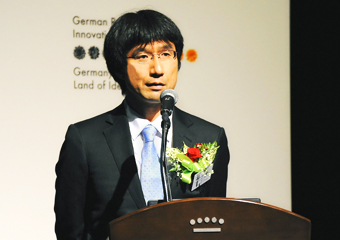 Kawano giving a speech at the ceremony

Dr. Gottfried Wagener was a German-born scientist who played an important role in the foundation of the Tokyo Vocational School, the predecessor of Tokyo Tech, where he later taught ceramics. Inspired by his work, the prize was established by eleven German companies and the German Chamber of Commerce and Industry in Japan in 2008 to support young researchers and promote industrial and academic cooperation between the two countries.

Kawano's award-winning research is entitled the "development of nanoscale terahertz sensing and imaging technology." By employing nanostructured devices based on carbon nanotubes (CNTs), graphene, and a two-dimensional electron gas (2DEG) in a GaAs/AlGaAs heterostructure chip, he and his collaborators have created new types of terahertz sensing and imaging devices: terahertz-photon detectors with a CNT/2DEG hybrid device, on-chip near-field terahertz imaging devices, and wide-band frequency-tunable terahertz and infrared detection devices with graphene.

Upon receiving the award, Kawano said, "The research on terahertz radiation has been regarded as an unexplored area. However, today this technology is expected to be applied to a wide range of fields including materials, space, life science, telecommunications, security, and medical care. Like other new research fields, there are many challenges in the development of sensing and imaging technologies using these electromagnetic waves. Rather than being a simple extension of conventional technologies, it takes out-of-the-box thinking to solve problems, which is all the more reason to take on this challenging research. There is quite a sense of accomplishment if successful."

He further commented, "It is a great honor to receive an award named after the German scientist who is most closely associated with Tokyo Tech. Germany has delivered outstanding results along with Japan in this field of research. I hope to continue to devote myself to research, and build bridges between Germany and Japan through joint endeavors. I would also like to extend my appreciation to my research collaborators and lab members for their support."