A neutron halo*1 has been observed in the neutron-rich magnesium isotope*2 magnesium 37 (37Mg, neutron number 25, and atomic number 12) for the first time by an international research group led by Dr. Nobuyuki Kobayashi and Prof. Takashi Nakamura of the Department of Physics, Tokyo Institute of Technology. This means that 37Mg is the heaviest nucleus in the chart of atomic nuclei (see Fig.1) in which a neutron halo structure has been confirmed experimentally.
This discovery was possible due to the very intense RI beams*3 provided by the RIKEN RI-beam factory, currently the world-leading facility for RI-beams science. There a beam of extremely neutron-rich 37Mg ions was produced and breakup reactions*4 were used to probe the microscopic structure of this nucleus. The current achievement follows a recent one on the lighter nucleus, 31Ne, where unique exotic structures - a halo, deformation and the disappearance of magicity were all observed - and the breakup reaction technique was developed (see article "Unique Exotic Structures Found in Extremely Neutron-rich Atomic Nuclei" and Physical Review Letters 112, 142501 (2014)).
The new research involved a Tokyo Institute of Technology and RIKEN led international collaboration with, University of Surrey (UK), Japan Atomic Energy Agency (JAEA), Western Michigan University (USA), St. Mary's University (Canada), Seoul National University (S. Korea), Laboratoire de Physique Corpusculaire de Caen (LPC-CAEN) (France), University of Tokyo Center for Nuclear Study (CNS), and Tokyo University of Science. The new results were published on June 18th in the electronic issue of "Physical Review Letters," (N. Kobayashi, T. Nakamura et al., Physical Review Letters 112, 242501 (2014)), the foremost letters journal of the American Physical Society. 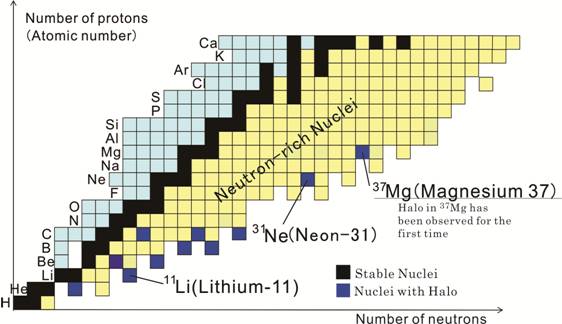 Fig.1 The chart of atomic nuclei (known also as Segre Chart) plots nuclei by their number of protons (atomic number) vs. number of neutrons. The yellow region corresponds to the neutron-rich nuclei. A neutron halo has been found in about 10 neutron-rich atomic nuclei, shown in blue. 37Mg is the heaviest that has ever been confirmed

A very rare nuclear state where one or two neutrons have a significant probability of being found far outside of a smaller, more compact core nucleus. About ten nuclei have so far been confirmed to exhibit such a halo structure.

An atomic nucleus is composed of protons and neutrons where the number of protons, called the atomic number, determines the associated chemical properties of the element. Nuclei with the same number of protons but different numbers of neutrons are called isotopes; 37Mg is a neutron-rich isotope of magnesium.

The current experiment used Coulomb breakup and nuclear breakup to clarify the microscopic structure of 37Mg. Coulomb breakup is induced by collisions of 37Mg with a heavy target nucleus such as lead. The 37Mg nucleus is then excited by the large Coulomb forces and is broken apart into 36Mg and a neutron. Its breakup probability is sensitive to the density profile of the neutron in 37Mg. Nuclear breakup, on the other hand, is induced by collisions with a light target, such as carbon. In this case a neutron is knocked-off of the 37Mg nucleus and the residual nucleus 36Mg carries information about the state of this removed neutron; but with a different sensitivity from the Coulomb breakup process. These different sensitivities of the two breakup reactions were exploited in this work to extract the microscopic structure of 37Mg, such as the orbits occupied by the neutron and its halo property. This technique was also used recently to study 31Ne, and has a wide potential to be applied to heavier very neutron-rich nuclei.