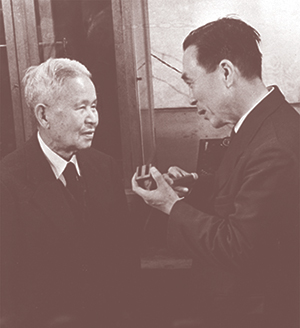 Relations between Tokyo Tech and TDK have a long history extending back to the invention and commercialization of ferrite in 1930. Ferrite, a magnetic material and one of Japan's most important original inventions, grew out of the research of Dr. Yogoro Kato and Dr. Takeshi Takei at Tokyo Tech's Department of Electrochemistry. TDK was founded on December 7, 1935, to engage in the commercialization of ferrite. The company was initially called Tokyo Denki Kagaku Kogyo after the name of the Institute's department that made the invention. It was a pioneering university-launched venture company in Japan.

Subsequently, ahead of the rest of the world, ferrite came to be applied in wireless communication equipment and radios in Japan, and later it influenced the evolution of all kinds of electronic devices, such as the deflection yoke cores used in television cathode-ray tubes and transformers to adjust voltage. Nowadays ferrite is used in a wide range of applications, including smartphones, tablets, and, in the automobile field, hybrid and electric vehicles. Ferrite contributes immensely to society as an important electronic component in state-of-the-art electronic equipment.

In recognition of these achievements, in October 2009 the Institute of Electrical and Electronics Engineers (IEEE), the world's largest academic society relating to electricity and electronics, granted the IEEE Milestone award that recognized historical achievement in the electrical, electronics, and related fields, to Tokyo Tech and TDK for the "Development of Ferrite Materials and Their Applications."

On the basis of this organizational alliance agreement, Tokyo Tech and TDK will explore the unlimited potential for innovation possessed by magnetic and magnet technology through the implementation of multiple joint research with the aim of achieving highly original developments that will lead to next-generation electronics and in turn increased competitiveness for Japan.