Barium titanate (BaTiO3) and lead zirconium titanate (Pb(Zr,Ti)O3) are well known ferroelectric materials that are used for fabricating capacitors and actuators. Their crystal structures belong to the perovskite-type oxide group (ABO3) with a BO6 octahedral coordination.

However, new and important ferroelectric compounds with other structural groups have not been found during the last decade.

Now, Mitsuru Itoh and Hiroki Taniguchi (present address:Nagoya University) and their colleagues have succeeded in the synthesis of new ferroelectric silicates with a tetrahedral coordination. The mechanism for the evolution of ferroelectricity was studied by both experiments and theoretical calculations.

The refined crystal structure and calculated electronic and phonon structures consistently explained the ferroelectricity of this material appearing below 673 K.

The origin of ferroelectricity of Bi2SiO5 was attributed to the twisting of the silicate tetrahedral chains. This new finding may trigger materials research of new ferroelectrics with other structural groups and coordination numbers of 4, 5, and 7. 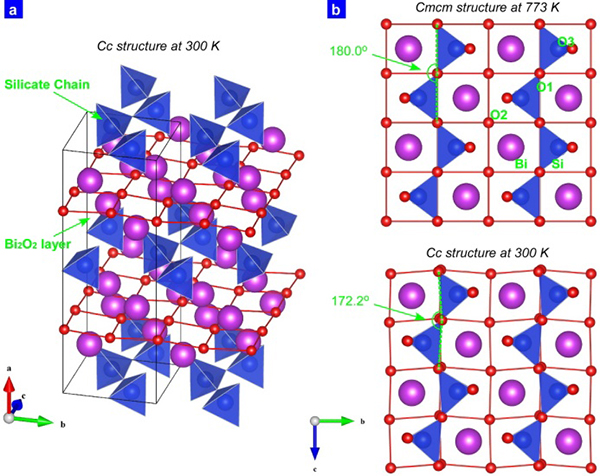