AOTULE (The Asia-Oceania Top University League on Engineering) is a league of thirteen premier engineering universities in the Asia-Oceania region. Its main mission is to create a platform for improved engineering education and research and develop a global mindset through joint workshops and student and faculty exchanges among 13 member universities.

AOTULE hosts an annual Student Conference, where students from member universities gather to present their research findings. Students from Tokyo Tech recount the experience at a conference held in 2014 at the University of Melbourne, Australia. 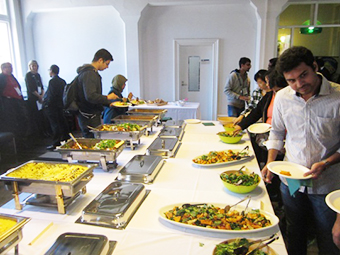 Buffet-style lunch after a presentation session

I had the opportunity to attend the AOTULE Student Conference held at the University of Melbourne in late November. With summer approaching, we were blessed with warm and comfortable weather, although the mornings were chilly. It was wonderful to be able to communicate with other students staying in the same student residence located within the University of Melbourne campus.

A welcoming buffet party was held upon arrival and then two days of oral presentation by students from various universities from the following day onwards. Not only giving a presentation in English, but also participating in a conference featuring many students from different majors in the same venue was a rare and precious opportunity for me to learn about fields which would normally be unfamiliar.

Completing all presentations on the second day in the morning and buffet lunch, AOTULE participants were invited to attend a bus tour in the city, which lasted three to four hours. It was a very intense experience to see so many tourist spots of Melbourne in such a short time.

Even though there were no workshops like those held last year, this year's activities were dedicated to deepening communication among students via a BBQ party at the night of the first presentation day as well as a campus and city tour. I believe students could enjoy long hours discussing with their peers, staying in the same residence.

The event also featured creative hospitality ideas to ensure the comfort of all those in the stay, such as so-called "morning tea" and "afternoon tea" breaks between presentation sessions, where beverages, elaborate sweets and snacks were served. I would like to express our gratitude to the host staff, not only for providing environments to facilitate students' presentation of their research but also for promoting mutual interaction; as well as to all participants for their efforts to deepen exchanges through research. 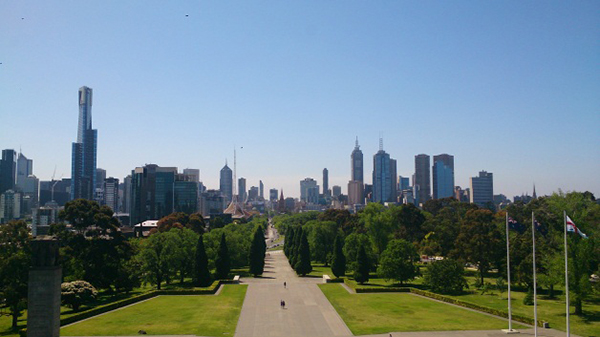 I wish this very productive AOTULE Student Conference will continue for many years, even after celebrating its 10th anniversary next year, especially so that those Japanese students who tend to be reluctant to speak English (like myself) can discover new horizons through wonderful conference experiences.

Despite a more-than-10-hour airplane flight and transit, we arrived in Melbourne, Australia, in the afternoon of November 26, to cool summer weather, which intensified our happiness and excitement. At last, Here We Are! 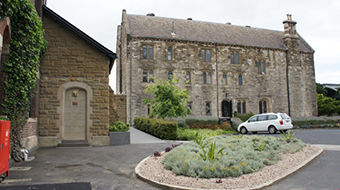 All of the conference students were staying in the Trinity College residence hall from November 26th to the 29th. There are many classic Gothic architectures, beautiful gardens and parkland. After everybody checked into their rooms, a local staff (the University of Melbourne) greeted us and escorted us to the AOTULE student conference registration desk and welcome reception. On our way, it was interesting to learn from the staff that Melbourne is famous for having four seasons in one day! The reception was in the top (10th) floor of the Law Building, where the view from window offered us the first glance of viewing the metropolitan part of the city. The Vice-Chancellor of the University of Melbourne and the Dean of Melbourne School of Engineering gave us welcome greetings, where their dry sense of humor made us feel at home. The day ended with good drinks and tasty delicacies. 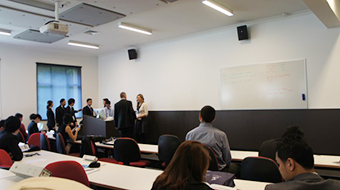 The conference began with the opening ceremony in the morning of November 27. From these talks, we learned that there will be potential new members interested in joining AOTULE, from India, Vietnam and Sri Lanka. Later on, we participated in the plenary session, where Professor Burkitt gave a talk about his cutting-edge research on the Bionic Eye and Dr. Smith talked about her site remediation in Antarctica. Both speakers belong to the University of Melbourne, and their talks gave us insights into research studies. (Each year in AOTULE, a different university member hosts the annual fall meeting.) After morning tea, the student conference officially started. Sessions on November 27 covered Mechanical, Civil, Biomedical, Environmental and Materials Engineering.

Students from member universities with different backgrounds actively exchanged ideas on research and related issues. Even during lunch time, the communications kept going on. I am sure everyone could obtain some new ideas from the discussions and chatting. After this fruitful day, we were treated to an Australian Barbeque Dinner. It was so enjoyable sitting on the lawn in the sunshine, talking, eating, relaxing, and making new friends! 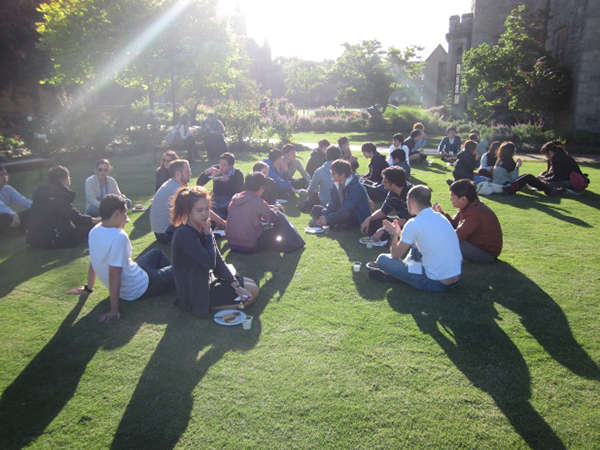 Australian BBQ banquet in the sun

On the morning of November 28, there were two sessions and they were the last of the conference. The sessions involved the fields of Chemical and Electrical Engineering. We all did a good job in presentations and Q&As. After all sessions, we had a lunch with deans, faculty and staff in a student lounge. Since this was the last gathering of the conference, it was a formal buffet. We cherished the last chance of talking to local students and staffs, and we promised that we will keep in contact in future! In the afternoon, the University of Melbourne kindly provided us with a city-wide bus tour. We visited downtown, beaches, heritages, Olympic sites, as well as historic parts of Melbourne. The most impressive thing I learned was about the immigration history of Melbourne due to the Gold Rush. The third day ended with the lovely trip.

Our way back started on November 29, and we safely landed in Tokyo in the morning of November 30. This trip is a meaningful and unforgettable one. I made new friends from Tokyo Tech, AOTULE member universities, as well as at the University of Melbourne. The exchange and communications will definitely become a precious fortune in my life. In addition, I feel lucky to get to know the city of Melbourne. It has easy access to both nature and metropolitan area, it is international and lovely! At the same time, I have strengthened my decision on my future career path. I want to work upon the global stage. I want to be an engineer who not only creates things, but also spreads ideas around the world!