The joys of sports and sports science

These lectures are for Tokyo Tech graduate students, faculty, and staff, but the sixth lecture of the series was open to the public.

Tokyo Tech graduate, Professor Kazuyuki Kanosue of Waseda University's Faculty of Sport Sciences shared his views on physiology, the brain and neuroscience, and sports science along with his experiences in the field. 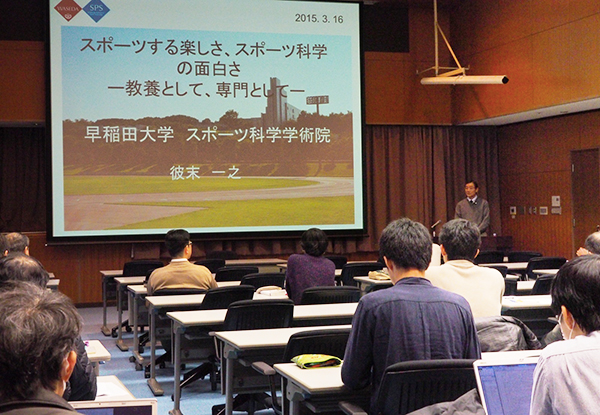 Why do we exercise and is it good for our health? 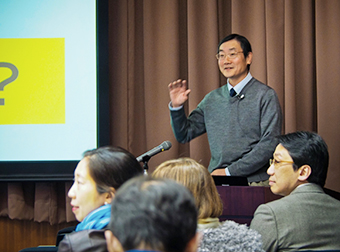 When attempting to answer why we exercise, Kanosue highlighted the role of homeostasis*, a process which regulates our body temperature, blood pressure, metabolism, and other internal bodily functions. In addition to hormonal secretion and autonomic nervous system activities, homeostasis also requires action. The relationship between being alive and exercise begins with this action.

There are many reasons why living creatures take action. Sometimes it is to secure nutrition or water, sometimes to search for a partner. Since human beings are programmed to feel good when taking an action that promotes our survival, we should by default feel good about exercise. Exercise is undoubtedly good for our health, but the idea that everyone enjoys endurance running is simply not true. For many people, it is a great struggle as they lack the level of proficiency needed to enjoy the activity. Kanosue suggested that this could be where Tokyo Tech plays its part in contributing to the world of exercise and sports. He wondered if the Institute could develop activities that require physical exertion and keep people interested. 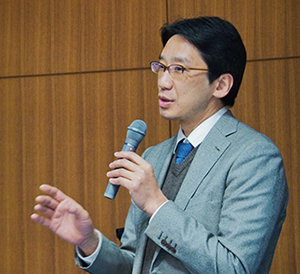 At one point of the lecture, all the participants were standing and doing stretching exercises. A few moments earlier, Kanosue had put forward that, according to some statistics, watching television for one hour subtracts 21 minutes from your life. "You have listened to my talk for an hour, so you have all just aged 21 minutes. Let's do some stretching and make up for the aging."

Kanosue also illustrated interesting ideas about sports from a scientific standpoint. When contemplating what it means to be talented in sports, and what makes athletes like footballer Homare Sawa or table tennis star Ai Fukuhara so great, Kanosue said, "It all comes down to the action of the brain. It is no longer physical, it is about how well one can call up an image of oneself doing an action. No one can call up a clear image of a movement he or she can't produce."

To support this idea, Kanosue introduced research findings of differences in the action of the brain between gold medalists and non-winners. He also demonstrated the difficulty of calling up images by showing participants photos of hands while asking them to immediately determine if the hand in question was the left or right one.

By citing the example of exercise and sports, Kanosue showed that scientific analysis can produce meaningful results in various fields. His message, "sports too can be elucidated using science," appeared to make a strong impression on the listeners. The lecture gave excellent pointers on how Tokyo Tech students can broaden their perspectives, specifically highlighting the potential in comparing one's own experiences with those of others, and then examining the differences from a scientifically analytical point of view.

*
homeostasis : Property of a system in biological beings and minerals which regulates internal conditions.

The Institute for Liberal Arts lecture series is supported by the Top Global University Project funded by the Ministry of Education, Culture, Sports, Science and Technology.