2015 Spring Conferment of Decorations on Tokyo Tech faculty and staff

The Order of the Sacred Treasure, established in 1888 by the Emperor of Japan, is awarded to those who have made distinguished achievements in various fields including education- and research-related public service and social work. 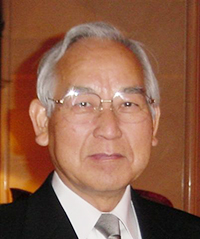 Takahashi earned his doctorate degree in 1962 from Tokyo Tech and assumed the position of associate professor in the Institute's School of Engineering in 1964. He took up a professorship in 1974 and worked on the research and development of photoelectric conversion devices, and thin film devices, specifically photovoltaic power generation and sensors. Takahashi also made significant contributions to the enhancement of international education.

I graduated from Tokyo Tech at the dawn of semiconductor electronics. Since then I have been fortunate enough to enjoy an education and research career in this field for over 50 years. I would like to take this opportunity to express my deep gratitude to my academic advisors, predecessors, colleagues, and students in my lab. I would also like to express my appreciation for Tokyo Tech's excellent academic culture.

When I was a student at Kyoto University, I hoped to engage in statistics research, and thanks to my academic advisor's recommendation, I gained employment with the Institute of Statistical Mathematics. Three years later I transferred to Tokyo Tech as an assistant professor in the Department of Mathematics, and worked until my retirement. I had a fulfilling academic life at Tokyo Tech with its outstanding faculty and vigorous students. I feel I have been able to contribute to leading-edge research in a free academic environment. I am deeply grateful to all for this conferment.

Saito joined Tokyo Tech in November, 1959 as an administrative staff member. After working at the Personnel Affairs Division and General Affairs Department, he transferred first to Gunma National College of Technology, then Osaka University of Foreign Studies, Utsunomiya University, and Nagano National College of Technology, achieving great improvements in the operation and development of these institutions. In April, 1994, Saito returned to Tokyo Tech, working as the administrative director of the Interdisciplinary Graduate School of Science and Engineering for two years. His unparalleled knowledge and experience contributed greatly to the progress of the Institute.

This is a great honor and pleasure. After the conferment ceremony, I had the distinction of meeting the Emperor at the Imperial Palace and was deeply moved. For 38 years starting in 1959, I was blessed with the privilege of working with a wide variety of people that included truly extraordinary Tokyo Tech supervisors and predecessors. I would like to express my appreciation for their guidance.