The Egypt-Japan University of Science and Technology (E-JUST) celebrated its fifth anniversary through a series of events held over three days in May at Bibliotheca Alexandrina, a library and cultural center in Alexandria.

A meeting of the E-JUST Board of Directors and the 2015 Graduation Ceremony were both held on May 19. The 2nd E-JUST International Conference on Innovative Engineering (ICIE 2015) was held from the evening of May 19 through May 21.

The conference involved many participants from both Egypt and overseas, including guests from Japanese universities involved in E-JUST. Tokyo Tech Professor Emeritus Masaaki Suzuki, now first vice president at E-JUST, and Professor Emeritus Teijiro Ichimura, advisor to the dean of the E-JUST School of Energy, Environmental and Process Engineering (EECE) attended from Tokyo Tech. They were joined by Associate Professor Oliver C. Saavedra of the Department of Civil Engineering and Associate Professor Yuji Tou of the Department of Industrial Engineering and Management. Professor Yoshitoshi Tanaka of the Graduate School of Innovation Management also attended as a keynote speaker.

Suzuki and Ichimura participated in the Board of Directors meeting on May 19.

The same afternoon, a graduation ceremony was held for the fifth, sixth, and seventh cohorts of graduate students. The ceremony included February 2014 - February 2015 graduating students for whom ceremonies had been postponed, and many brilliant graduates from the three departments supported by Tokyo Tech were commended.

Dr. Alyaa A. Al-Fazary, representative of E-JUST graduates, is the first recipient of a doctorate from the E-JUST Department of Industrial Engineering and Systems Management (IEsM), which is supported by Tokyo Tech's Department of Industrial Engineering and Management. Alyaa studied at Tokyo Tech for nine months from February 2013. In her graduation speech, which she delivered in Arabic, English, and Japanese, she mentioned reminiscences of days spent at Tokyo Tech. As supporters of E-JUST, Tokyo Tech takes pride in having turned out such excellent graduates. 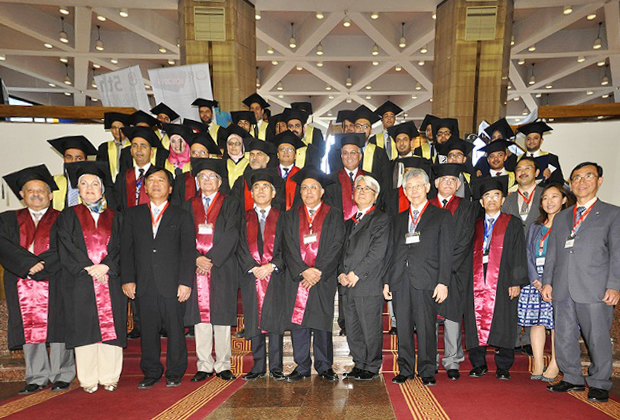 The 2nd E-JUST International Conference on Innovative Engineering (ICIE 2015) is held to promote higher education in the Middle East and Africa through the sharing of activity reports from E-JUST and Japan.

The conference was organized under the auspices of H.E. Mr. Abdel-Fatah El-Sisi, President of the Arab Republic of Egypt and chaired by E-JUST Vice President Suzuki. Many participants representing academia and business from Japan, Egypt, and neighboring nations attended.

The conference began with welcome remarks by Vice President Suzuki in an opening session held on the evening of May 19. Following speeches by the Ambassador Extraordinary and Plenipotentiary of Japan to the Arab Republic of Egypt Takehiro Kagawa and E-JUST President Ahmed El-Gohary, Professor Katsuhiko Shirai, former president and professor emeritus of Japan's Waseda University, delivered the opening lecture entitled "Overview of Higher Education in Japan." Shirai serves as a member of the Board of Trustees for E-JUST.

Mr. Kiyoshi Kodera, vice president of the Japan International Cooperation Agency (JICA) gave the keynote lecture entitled "JICA's Contribution to Higher Education." This was followed by a series of invited lectures that described activities sponsored by Japan and conducted by universities in the Middle East and Africa to promote higher education in Egypt and surrounding nations.

The conference sessions on May 21 were focused on activities conducted through linkages between E-JUST, Japanese universities, and local industries to promote innovation. Professor Yoshitoshi Tanaka of Tokyo Tech's Graduate School of Innovation Management gave a keynote lecture entitled "Japanese experience in implementing and managing a technology transfer office," which focused on Tokyo Tech's experiences in intellectual property creation as a result of industry-government-academia cooperation.