The mechanisms of nuclear fission, especially the origin of asymmetric mass division in the low-excitation region of U and Pu, are still not clear. There are many conflicting arguments to explain the experimental data, making a proper prediction of unmeasured quantities quite difficult.

In addition, there are many technical problems in generating a realistic dynamical calculation of nuclear fission and its interpretation.

Aritomo, Chiba and Ivaniuk at the Research Laboratory for Nuclear Reactors at Tokyo Institute of Technology have tried to understand the mechanisms of nuclear fission in terms of a dynamical model based on the Langevin equation. Then, the mass asymmetry in the fission of 236U at low excitation energy is clarified by the analysis of the Langevin trajectories.

The potential energy surface and transport coefficients were calculated by the two-center shell model, which includes the shell and pairing effects. This is the only model that can give these quantities starting from a mono-nucleus and moving on toward the separated fragments that appear during fission.

The position of the peaks in the mass distribution of fission fragments from low-energy fission of 236U is determined mainly by the saddle point configuration originating from the shell correction energy. The width of the peaks, on the other hand, results from the shape fluctuations close to the scission point caused by the random force.

The researchers try to understand in a unified way the mechanisms of nuclear fission and correlations of fission-related quantities, to make a step toward a quantitative understanding of fission. 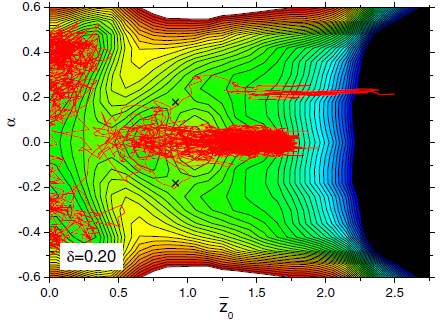