July 21 was another scorching day in Japan, but at Tokyo Tech, the real heat was on the racetrack. It was the day of the widely anticipated Tokyo Tech PFC Race, an annual event showcasing pipe frame cars built by 3rd-year undergraduate students in the Department of Metallurgical Engineering. The race is traditionally held on the deck in front of the Main Building on Ookayama Campus.

Pipe frame cars are electric vehicles powered by lead batteries. Aluminum pipes, tires, electric motors, and lead batteries are provided to student teams who then design and build original vehicles. While providing entertainment and generating excitement and mirth among the audience, the race is also the final presentation of the undergraduate course, and running performance, design, and endurance of the cars are evaluated. 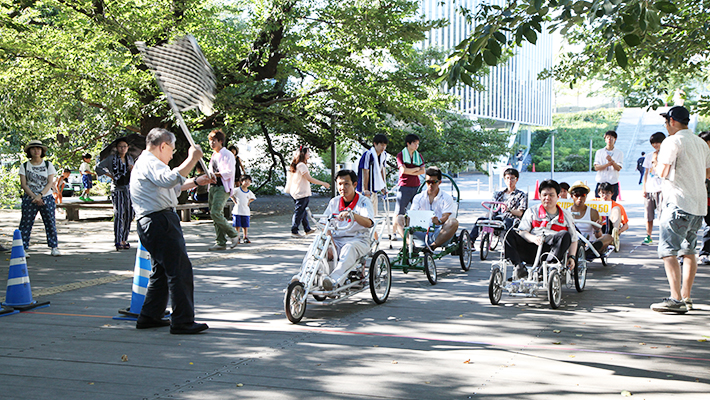 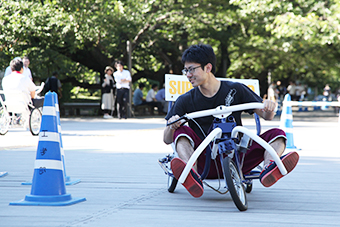 The PFC Race has two categories: a time trial involving one lap around the circuit, and a thirty-minute endurance race. This year, the five Tokyo Tech teams, made up of sixteen students, were joined by two pipe frame cars from SUS Co., Ltd. 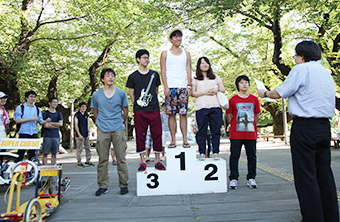 In the time trial race, the corporate cars were too strong, with Team LAMPHUN taking first and the other SUS car coming in second place. However, in the endurance race, the student teams put up a great fight, with Team SUPERCUB 50 showing off its comprehensive strength by taking home the silverware.

Members of the public can test-drive pipe frame cars built by students at the Tokyo Tech Festival in October.

Group photo after the races