Twenty teams that passed the preliminaries for the 21st Supercomputing Contest (SuperCon) gathered to solve assigned problems at Tokyo Tech and Osaka University from August 17 to 21, 2015. SuperCon, held every summer, is a contest in which teams of two to three high school or technical college students compete by creating programs for supercomputers.

The underlying premise is that both PCs, which students are very familiar with, and supercomputers, operate on the same basic principle. However, if a PC is thought of as an ordinary passenger vehicle, then a supercomputer is a race car. The question is whether the ideas and skills behind the students' programming can elicit this race car-like super performance.

In order to acquire the necessary skills, workshops and materials are provided in advance to participating high school students. Graduate students also work as tutors and give advice to contestants during the SuperCon event. Still, students must ultimately come up with their own innovative ideas which they utilize in their programs. 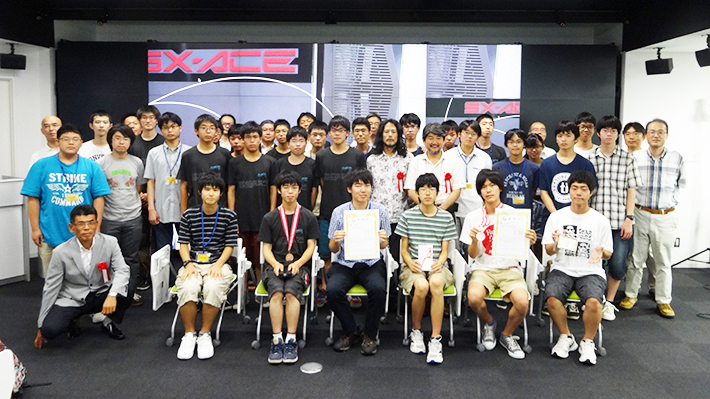 The assigned problems in the contest are cutting-edge issues from a variety of scientific and technical fields. Although designed for high school students and presented in an easy-to-understand manner, the problems are challenging. Teams compete in terms of both accuracy and speed, with the judging committee evaluating the outcomes.

This year, the general theme of the assigned problems was "Discovering chemical oscillation patterns." Participants competed to solve three programming problems by optimizing pattern-matching algorithms and accelerating cyclic cellular automata computation on the new supercomputer in the Cybermedia Center at Osaka University.

In recognition of outstanding program performance, the Institute of Electronics, Information, and Communication Engineers and the Information Processing Society of Japan awarded the Institute Prize to the winning team on August 21. The top three teams were also awarded certificates and medals by Vice Director Shinji Shimojo of the Cybermedia Center at Osaka University.