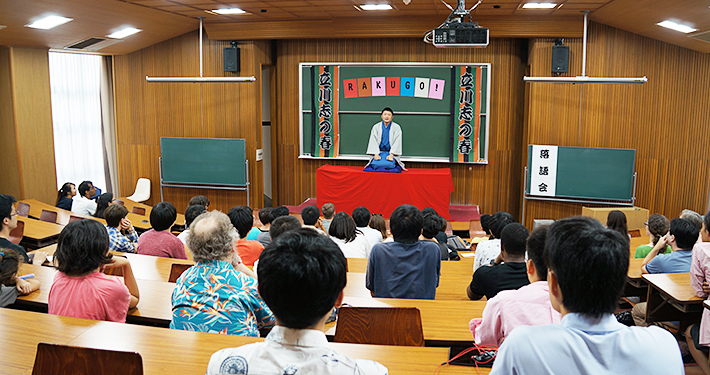 Playing to a full house

Rakugo is a traditional verbal performance art dating back to the Edo period, some 300 years ago. A single performer sits in the middle of the stage and performs alone the dialogue of various characters and stories without special tools or explanation, expressing a wide range of emotions with only minimal props and movements. The raku in rakugo means punchline, and go means story, so rakugo is a story with a punch line. This year, the theme was "Rakugo as the art of imagination." 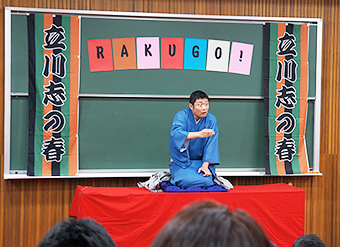 Shinoharu's performance of having good sake

Shinoharu Tatekawa — a disciple of Shinosuke Tatekawa, one of the most famous rakugo artists in Japan — gave the performance, as in previous years. After explaining the basis of rakugo, Shinoharu performed the well-known classic story Jugemu. Jugemu is the story of a boy with an extraordinarily long name. Next, Shinoharu performed the classic story Chiri Tote Chin, in which two men try to fool a man who is pretending to know everything. The two use rotten tofu, or bean curd, and tell him it is "very special food from Taiwan called chiri tote chin."

After these two amusing classic stories, Shinoharu performed his original story, The Important Thing, about a grandfather and his grandson. The grandfather loves to tell proverbial phrases to support the funny little lies he tells his grandson. Years after their funny conversations, the grown-up grandson remembers the most important thing his grandfather told him. This kind of story is called ninjo-banashi, or an emotional-styled story. Shinoharu once said, "I tried classic funny stories in English, and many non-Japanese audiences enjoyed them. However, I'm not sure whether this kind of original emotional story will be welcomed by them." 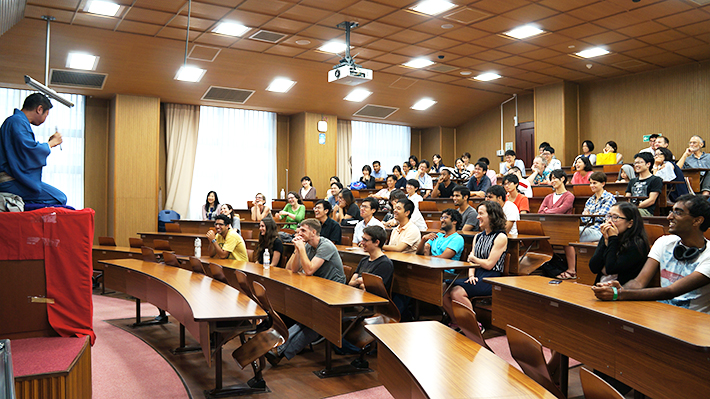 He had nothing to fear. The audience members were so moved, some of them were almost crying.

After three stories, Shinoharu held a Q&A session and performed one more short story to demonstrate the range of rakugo.

Comments from the audience

Honestly speaking, before watching the rakugo show, I didn't expect this kind of traditional Japanese performance would still be so attractive to modern people, even people from different culture backgrounds. But it turned out that I really enjoyed myself during the show and kind of fell in love with rakugo. The reason for the popularity of rakugo, as the performer said, might be that it touches the common life of common people. The stories can be shared by people of all ages and all nationalities, and can bring laughter and warmness to the audience. In that sense, rakugo is like a cup of tea to me. It's not as strong as alcohol, or as sharp as soda, but it can provide the long, nice aftertaste.

Today was the first time I heard the word rakugo — actually the second after I was told there would be a rakugo performance — but I'm sure it won't be the last one! It was a very enriching experience. I've done theater and improvisation myself, but seeing how one person alone and kneeling can make you imagine scenes with several people and jump in time is simply great. It's an amazing art and it is a unique opportunity to see it performed in English. Highly recommended, in the worst case, you will still laugh a lot at the jokes included in the stories!

The rakugo performance helped highlight the cultural similarities between Japan and the West, showing that all cultures can laugh and learn the same way. I was very impressed by the skill of the performer, and his ability to adapt to his audience. It is clear that his years of training and study have paid off. I especially liked his extra story about the driving monkey! Rakugo is an experience in Japanese culture that everyone should try.