University of Manchester Professor Danielle George took the stage at the Tokyo Tech Lecture Theatre on September 12 and 13 to perform the Royal Institution's (Ri) Christmas Lecture. Ri's Christmas Lectures have been inspiring both children and adults for 190 years. Japan has hosted special summer versions of the lectures since 1990. This year's lecture, Making Contact, was co-sponsored by Yomiuri Shimbun and Tokyo Tech. 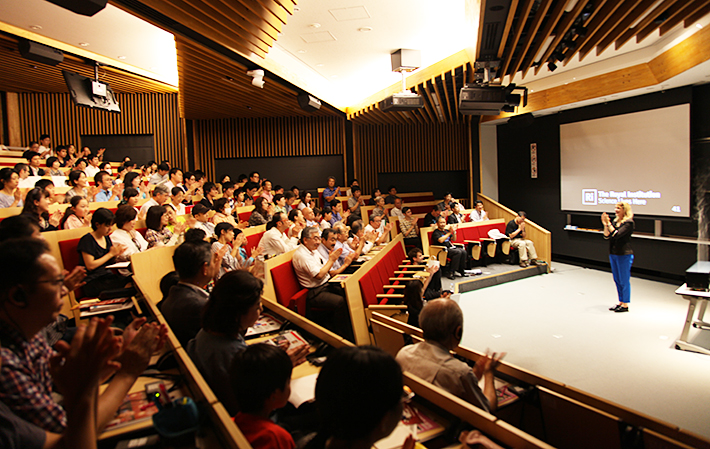 The lecture was performed four times over the weekend, the first of which was held on Saturday morning for Tokyo Tech students, faculty members, and alumni. Opening greetings were given by Tokyo Tech President Yoshinao Mishima, the British Embassy, and Professor Naoto Ohtake, head of the Frontier Education Program's technical committee which is in charge of planning and operations at the Lecture Theatre.

While introducing the audience to historically significant devices, basic scientific principles, and advanced technologies, Making Contact set out to create the ultimate communication experience engaging all the five senses. To demonstrate this, George broke her 75-minute lecture into several stages:

Using a transmitter, a short wire, a membrane, and a water-acid solution, George first demonstrated the transmission of sound by recreating Alexander Graham Bell's invention — the telephone. To explain how an image is captured, she then showed how CMOS sensors in digital cameras function using beanbags as electrons, buckets as capacitors, and volunteers from the audience as pixels. She also illustrated the principles of fiber optics and video transmission with a simple experiment using a bucket and torch.

Next, it was time for George's assistant, second-year Tokyo Tech graduate student Michael Behrens to "take the stage." Although Michael himself was never present, a hologram projected onto a fog screen on stage brought him in front of the audience. Using a robotic hand remotely controlled by Michael, members of the audience were also able to "shake his hand," adding touch to sight and sound.

With the world's first electric lollipop developed by researchers at City University in London, George then shared the experience of taste with Michael. The two electrodes stimulating taste buds of the tongue created a lemon flavor. Finally, this flavor was further enhanced by using Scentee, a device attached to the headphone jack of a smartphone which releases the scent chosen by the user. And so, the ultimate communication experience was complete.

Encouraged by Associate Professor Takushi Saito, who acted as moderator, the audience played a big part in the success of the lecture, eagerly volunteering to join Professor George on stage whenever they could. It was a memorable day for all those involved.