Tokyo Tech and Tongji University concluded a university-wide cooperation agreement in 2007. The visit was intended to promote further collaborations and to increase student exchanges.

As this was Pei's first visit to Tokyo Tech, Mishima shared an overview of the Institute, describing the education reforms and outlining internationalization activities implemented under the MEXT-sponsored Top Global University Project. Pei remarked that the Chinese government is promoting the internationalization of its universities through similar activities. The university presidents exchanged ideas regarding online education and academia-industry collaborations in China and Japan. As the meeting concluded, Pei introduced Tongji University's new summer program for 2016, which will be organized around the theme of "Urban and Regional Development in Asia Today," and encouraged Tokyo Tech to send its students. 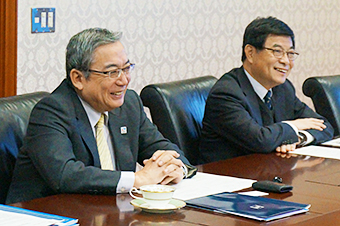 In a separate collaboration underway since 2014, the engineering research labs affiliated with the same department at Tokyo Tech and Tongji University's College of Civil Engineering have organized joint summer workshops for students and faculty to exchange presentations on their research. Held in alternate years in Tokyo and Shanghai, the workshops have encouraged active exchanges between participants from the two universities.