Associate Professor Masaaki Kotera of the Graduate School of Bioscience and Biotechnology has received the 2015 Oxford Journals-JSBi Prize. This prize, sponsored by the Japanese Society for Bioinformatics, is awarded to young researchers with distinguished achievements and who are expected to contribute toward further development in the field of Japanese Bioinformatics. 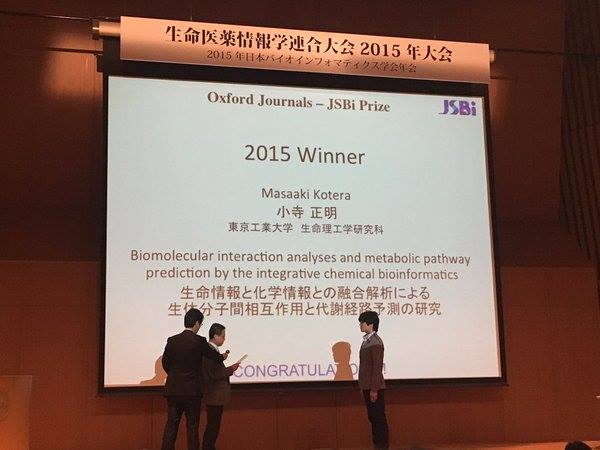 Award Ceremony at the Joint Conference on Informatics in Biology, Medicine and Pharmacology (2015)

Associate Professor Masaaki Kotera introduced chemical structure calculations of small molecules in order to tackle one of the biggest issues in the field of bioinformatics—building a bridge between genome information and metabolome information. He has published various papers as the first author or as the corresponding author, participated in a number of international conference presentations on this subject, and has made distinguished achievements. He gave oral presentations four times, in 2009, 2013, 2014, and 2015, at the Intelligent Systems for Molecular Biology (ISMB) conference, the most respected international conference in bioinformatics, and is well known internationally in this field.

The data standardization and integration, as well as the formation of international consensus are extremely important issues in bioinformatics. In this regard, the Ministry of Education, Culture, Sports, Science and Technology (MEXT) promotes the standardization and integration of various data including data related to genes and compounds through the "Integrated Database Project". For a long time, he has been studying the data standardization and classification schemes that are often used as gene annotation, including nomenclature of enzymes by the Enzyme Commission (EC) numbers and nomenclature of carbohydrate chains. He is also active as an associate member of the Nomenclature Committee of the International Union of Biochemistry and Molecular Biology (NC-IUBMB), an international organization that determines standard nomenclature for enzymes and enzyme reactions. In addition, he actively participates in international conferences such as the "BioHackathon", which occupies an important position in this field, where he contributes to the standardization of information related to enzyme reactions, chemical compounds, and carbohydrate chains. His overall body of work related to these achievements and his activities have been praised and are considered to deserve this prize.

I am very grateful and honored to receive this prize. I thought that I had become accustomed to making presentations at conferences, but I became extremely nervous when giving this award lecture. The research that I have been engaging in is not exactly what people would imagine when they hear the word "bioinformatics", so I am very much honored to receive this recognition. I am determined to make even greater effort in this research, and I am looking forward to any discussions and possible collaborations with everyone.