A final symposium to review the performance of the Re-Inventing Japan Project B-1 was held on January 22, 2016 at Ono Auditorium, Waseda University. The project, supported by Japan's Ministry of Education, Culture, Sports, Science and Technology (MEXT), was conducted by seven universities for a five-year period. Tokyo Tech faculty and students participated in the symposium.

Presenters included Mr. Hashiru Negishi, a doctoral student in the Department of Biomolecular Engineering who studied at California Institute of Technology (Caltech) under TiROP, and Mr. Takayuki Kishi, a 3rd-year bachelor's student in the Department of Control Engineering who visited England in the TiROP Short Visit Program. Both made presentations in Part 1 of the symposium on "changes in my surroundings and myself as a result of the TiROP program." 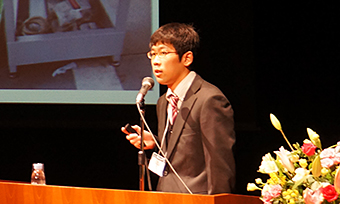 I conducted research on synthetic organic chemistry at the Caltech laboratory of Professor Brian M. Stoltz from October through December 2015. Every day of the three months I spent in the USA brought me endless surprises in both research and life. Everything from lab procedures and attitudes toward research, to cultural differences and diversity, was new for me, and I had an incredibly valuable experience. At the networking event, I made a presentation on how much I grew and changed through the experience.

I also listened to stories shared by participants from other universities whose study abroad goals and areas of expertise were different from mine. These further broadened my views. Through my experience and those described in other presentations, I again felt that by having exchanges with people who have different values, we ourselves grow. I also thought I should use my experience overseas and further devote myself to my research to be active in the world. 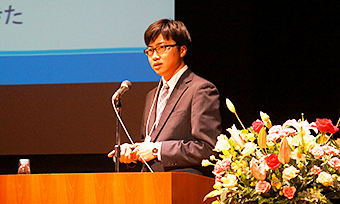 Mr. Kishi speaking at the event

The symposium was a great opportunity to look back on what I learned in the short visit program and hear about other universities' overseas programs and projects. It was for two weeks that I visited England in September 2015. Upon returning to Japan, my motivation for learning English and my major subjects was much higher, and I studied hard, but nearly four months later, my motivation for learning had diminished.

Thanks to this occasion, in the course of my preparation for the presentation, I recollected the experiences and values I gained overseas as well as my motivation for learning upon my return home. During the event, I listened to presentations made by representatives of other universities, some of whom were graduate students and had studied abroad on long-term programs. They talked about their experiences and difficulties and how these influenced their ways of thinking about their growth and career paths after graduation. Their stories were thought-provoking.

This event was an invaluable opportunity to share overseas experiences, outcomes, and progress through presentations by students from various universities. Going forward, I hope to apply what I heard to my academic life as much as possible.

In Part 2 of the symposium, faculty representatives from participating universities served in a panel discussion on the effects of the Re-Inventing Japan Project on each university and reported each university's plans following the conclusion of the project. The project leader for Tokyo Tech, Dean Kikuo Kishimoto of the Graduate School of Engineering, made a presentation on the achievements of TiROP. All participating universities expressed plans to utilize networks and schemes developed for the Re-Inventing Japan Project as a foundation for new activities.

Dean Kishimoto (second from right) with other panelists