Six Tokyo Tech students participated in the short-term study abroad program in the Philippines from March 1 to March 10, 2016 as part of the Global Scientists and Engineers Course.

Attending lectures at De La Salle University (DLSU) in Manila and the University of the Philippines Diliman, the Tokyo Tech students were able to hone their English listening skills and observe Filipino students in action during class discussions. Local students majoring in science and technology led the Japanese students on special tours of the campuses. 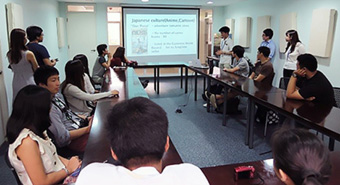 Exchanging opinions at University of the Philippines Diliman

At a cultural exchange event, program participants exchanged opinions with and gave presentations about Tokyo Tech and Japan to local students in the Faculty of Engineering and the Nihon Kenkyuu Kai, DLSU's Japanese Studies Society. These experiences not only introduced students to some of the cultural differences between Japan and the Philippines, but also prepared them for potential long-term study abroad programs in the future.