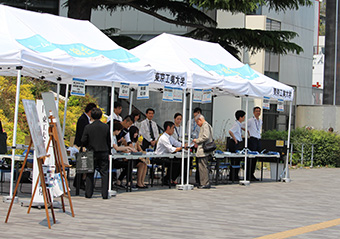 Tokyo Tech's 5th annual Homecoming Day was held on May 21, 2016. Despite both Ookayama and Suzukakedai Campuses hosting the event in past years, this year's festivities were restricted only to the main campus in Ookayama.

Homecoming Day brings together people of all ages and groups. Alumni can connect with current students and faculty, while families and members of the local community can learn more about Tokyo Tech. Student clubs and associations participate in the organizing of events, and alumni associations contribute by hosting talks. Tours are held for anyone interested in getting a glimpse of Tokyo Tech's facilities.

The tour of Tokyo Tech's supercomputer TSUBAME was once again extremely popular. With the aid of a video, guides provided 100 visitors with detailed insight into TSUBAME's advanced performance. An additional 200 visitors viewed the supercomputer during unguided tours. Tours of Ookayama Library were also conducted every 20 minutes, with a total of 325 people visiting the facility. 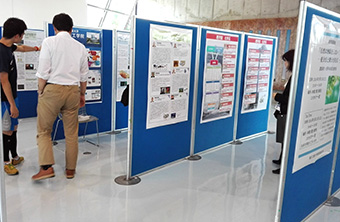 Student clubs played key roles in making the day another successful one. Current and previous members of the Science Techno Club, Los Guaracheros, the Tea Ceremony Club, Jugtech, IDAcademy, the Aikido Club, the Hang Gliding & Paragliding Team Sylph, the Soccer Club, JIZI, the A Capella Circle, and the Magic Club worked hard throughout the day. A Tokyo Tech volunteer group also organized an exhibit of products from Kumamoto, the proceeds of which were donated towards the reconstruction of the earthquake-hit area. 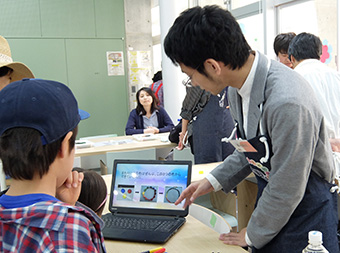 At the Collaboration Center for Design and Manufacturing, Tokyo Tech alumni held workshops where participants devised glass bead microscopes and coil motors. In the courtyard of the Main Building, Science Techno Club hosted Scienceland, a hands-on event where elementary and middle school students experienced the basics of chemistry, weather, mathematics, vortices, LED, and signals through a variety of activities. The youngsters also devised echo microphones, flatcars, and hovercrafts.

The Tokyo Tech Lecture Theatre was also bustling with activity. In the morning, four graduates of the Institute's doctoral program held a lecture for students about the merits of obtaining a doctoral degree, and how they are utilizing their experiences in work life. In the afternoon, Magic Class 2016, an experiment-filled lecture for high school students was held by Institute Professors Akio Hosoya and Hitoshi Tokura.

The evening reception was held at the Tokyo Tech Front. Speeches were delivered by Yoshinao Mishima, president of Tokyo Tech, and Yoshio Ishida, president of the Tokyo Tech Alumni Association. Live music was provided by the alumni of the male choir club, Schwalben Chor. At the standing reception, graduates were seen enjoying the reunion with former peers from each of the departments, fields of study, student clubs, and student exchange programs. The day ended with closing remarks from Executive Vice President Kiyoshi Okada. 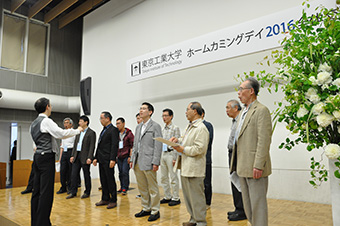 The 6th Homecoming Day will be held on May 20, 2017. All those who are interested in Tokyo Tech's activities are encouraged to join.