Magic Class 2016 was conducted at Tokyo Tech on May 21. Held in conjunction with Homecoming Day, this was the second session of the popular experiment-filled lecture series for high school students. Students, parents, teachers, and members of the general public once again filled the 200-seat Lecture Theatre to near capacity.

After an encouraging opening speech by Vice President for Education and International Affairs Toshio Maruyama, Institute Professor Akio Hosoya got the ball rolling with his lecture entitled Relativity theory is crucial to GPS. 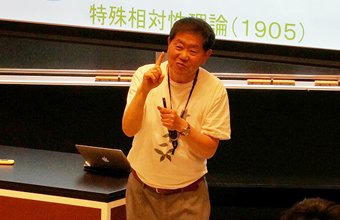 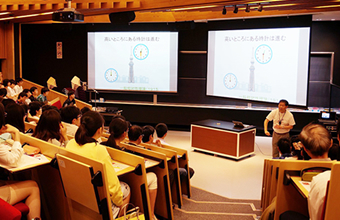 "What is a global positioning system? What is it used for?" Hosoya began. "We use it to obtain positional information. GPS is used in car navigation systems, and can also be used to ascertain the extent of ground movements in the event of an earthquake." He continued with the principles behind GPS, explaining that at any one time, there are at least six GPS satellites circling Earth which are equipped with clocks. The signals from these clocks are received and compared on Earth. "Therefore, we could say that GPS is a way of gaining information on distance by measuring time," Hosoya proposed.

"Now, I am sure you have all heard of clocks running slower than they should, right?" he continued, coaxing the students into Einstein's world. "Well, there is a deviation between the time measured aboard the satellite and the time here on Earth due to the time dilation effect by its motion and height. Therefore, we have to apply relativistic correction, or the GPS will not function as we want it to. "GPS is the only example we know of which shows us the great importance of the theory of relativity," Hosoya concluded.

The second lecture was entitled Do you like putting on makeup? This was given by Institute Professor Hitoshi Tokura.

"If you put an air-filled balloon into a large plastic bag full of carbon dioxide, what will happen? Let's test it out and see. While we wait for that, let's move on to other things."

"What is the purpose of makeup?" Tokura continued. "Let's try to find out by examining some everyday items." He began by showing the audience a close-up of clothing fibers under a microscope. Hmm. Both mundane and mysterious. The professor then showed a magnified color-printed sheet of paper, revealing a pattern of light and shade produced by the tricolor dots. Ok, pretty cool.

Next, Tokura produced two beer bottles, asking a volunteer to weigh each of them. One is 137 grams lighter than the other. But why? Because it makes use of cosmetic technology called ceramic coating. Makeup has many functions.

Experiment of a balloon

He then pulled out two pet bottles — one warm and the other room temperature. "How are these different? Well, the one for hot tea has a three-layer structure, and therefore is much more efficient at keeping oxygen out of the bottle. This unheated one, which has passed its use-by date, has a bit of a funny color, doesn't it? That is because no matter how tightly we close the bottle, oxygen will slowly seep in and oxidize the tea. So the makeup of the bottle matters.

How about coffee cans? POP!!! Tokura's lecture came to a close with a healthy pop from the balloon introduced at the start of the talk. Magic Class 2016 ended with a closing speech from Executive Vice President Kiyoshi Okada.

With a steady balance of theory and experiments, the high school students in the audience were once again provided with a healthy dose of Tokyo Tech magic. Feedback from the audience, as in the previous year, was very positive.

Program for Frontier Science and Technology