They were warmly welcomed by NTU faculty and staff, including Professor Alexander Zehnder of the Board of Trustees, Chief of Staff and Vice President (Research) Lam Khin Yong, and Professor Timothy White, research director in the President's Office. 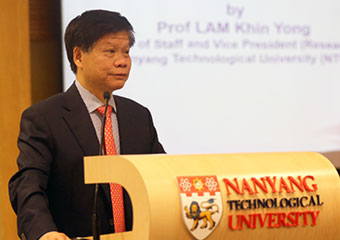 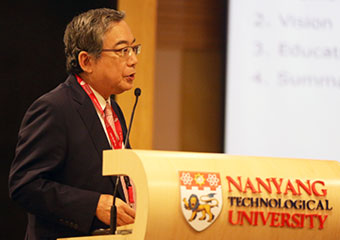 During the opening session, Lam shared the background of the joint workshop between NTU and Tokyo Tech, which was first mooted during Mishima's visit to NTU in February 2015.

Lam provided an overview of the steps taken by NTU to assemble talented doctoral students and faculty from all over the world. These activities have helped attract a high level of interest from multinational corporations seeking to collaborate with NTU. Lam also expressed interest in bringing researchers from NTU and Tokyo Tech together for collaborative research that could involve Japanese companies.

In response, Mishima expressed appreciation to NTU for hosting the joint workshop. Presenting an overview of Tokyo Tech's education reforms, which have since been launched in April 2016, he discussed the organizational changes to the education system, the revitalization of the curriculum, and his ambitious plan for the Institute to become one of the world's top ten research universities.

Following the opening remarks by Lam and Mishima, the joint workshop proper commenced with a focus on the research underway at NTU and Tokyo Tech.

NTU's White described how the Singapore university is "working towards translating its basic research into real economic activity" and explained the "Triple Helix" approach to university-industry-government collaboration on which NTU bases its translational research.

By responding to the nation-state's economic needs and global challenges, such as energy, water and climate change, all of which require urgent solutions in Singapore, NTU leverages government funding to support its partnerships with industry and translate its research into actual economic activity, said White.

He explained that the key to maintaining economic viability is a strategic focus on achievable outcomes by utilizing government support in its industry linkages. Examples of this include collaborations such as the NTU-BMW Future Mobility Research Lab and the Rolls Royce@NTU Corporate Lab. 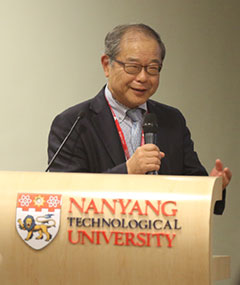 Tokyo Tech's Ohtake then shared an overview of research at the Institute, including recent achievements of its researchers in various fields. He also described Tokyo Tech's efforts to strengthen its research environment by promoting international research activities, developing new research fields under a more flexible research infrastructure, and offering comprehensive research support. These activities are part of a larger effort to position Tokyo Tech as an international research hub.

Citing the Global Hydrogen Energy Unit as an example, Ohtake explained the Institute's promotion of elite research units tasked with specific missions in cutting-edge research areas. The units receive support in securing research funding and hiring researchers as well as provision of laboratory space. Ohtake hoped the joint workshop would strengthen partnerships between researchers from NTU and Tokyo Tech and lead to further collaboration between them.

Institute Professor Ken Okazaki, head of the Global Hydrogen Energy Unit at Tokyo Tech's Solutions Research Laboratory, gave the joint workshop's first keynote presentation. He highlighted recent progress in hydrogen energy research in the form of commercialization of hydrogen fuel-cell vehicles and development of stationary fuel cell systems. Okazaki captured the audience's attention by discussing a global carbon-free hydrogen supply chain project that utilizes overseas resources such as brown coal from Australia, which can be liquefied and transported to Japan.

Noting historical trends in energy consumption, which were affected by factors such as population increase and urbanization, Mhaisalkar described Singapore's renewable energy transition policy and efforts to decarbonize energy. In collaboration with the Singapore government and industry partners, NTU launched an ambitious EcoCampus project that aims to achieve zero emissions through innovative technologies and high-impact energy efficiency.

In the afternoon, parallel breakout sessions on research in the fields of environmental engineering, new molecular chemistry, and interfacial science were conducted. In each of the three groups, faculty members from NTU and Tokyo Tech shared presentations, learned about their counterparts' interests and areas of expertise, and engaged in active discussions regarding each other's work. 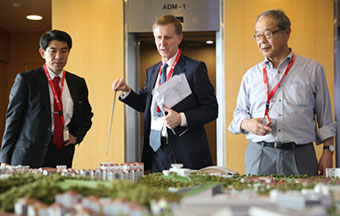 In the sessions on environmental engineering, participants presented research in water resources, materials recycling, and construction and building technology. Through the presentations and subsequent discussions, common interests emerged in areas such as energy, catalyst and gas reforming (biofuel), and recycling and its social impacts. The researchers also noted their interest in industry collaboration in these areas.

Researchers in the new molecular chemistry sessions shared presentations on energy and fuels, nanoscience and nanotechnology, and polymer science, and identified potential partners for collaborative activities in seven research areas. 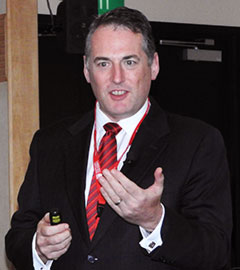 After presentations on coating and films, biomedicine and medical technology, and biotech and applied microbiology, researchers in the interfacial science sessions shared information about short-term visiting professorships and other cooperation and funding schemes.

United by a common objective of using engineering strategies to come up with innovative solutions to global health problems, they agreed on the importance of an interdisciplinary approach to utilizing knowledge and expertise, not only in engineering, but also in chemistry, physics, biology and medicine, to better understand and manage new clinical problems at the molecular level.

While the breakout sessions were in progress, leaders of the two universities held a separate meeting to discuss further academic collaboration. Though robotics was not a target theme for the joint workshop, NTU and Tokyo Tech recognised the potential for further collaboration in that area.

On day two of the joint workshop, the Tokyo Tech delegation was given an extensive guided tour of NTU's sprawling campus by Professor White. They visited laboratories mentioned in his presentation as examples of NTU's Triple Helix collaboration, including the Rolls Royce and BMW labs, the ST Engineering-NTU Corporate Lab and the Energy Research Institute@NTU. The tours included presentations that showcased the various laboratories' facilities, equipment and research capabilities.

Following the campus tour, Professor Russell Gruen, director of the Nanyang Institute of Technology in Health and Medicine (NITHM), introduced NTU's Lee Kong Chian School of Medicine (LKCMedicine), where he is vice dean for research and a professor of surgery. Established in 2013 as a partnership between NTU and Imperial College London, LKCMedicine offers a curriculum that brings together NTU's strengths in science, engineering and technology to find medical innovations and cutting-edge solutions to healthcare.

A wrap-up session was held to highlight the outcomes of the discussions from the various groups. Despite the limited time, the breakout sessions brought NTU and Tokyo Tech faculty members closer in sharing research interests and exploring possibilities for joint research collaborations. Participants also identified materials recycling, new molecular chemistry for energy and fuel, and interfacial science in biomedicine and medical technology as three key areas for collaboration going forward.

From left: NTU Chief of Staff and Vice President (Research) Lam, NTU Board of Trustees member Zehnder, and Tokyo Tech President Mishima in a meeting on the sidelines of the joint workshop

After closing remarks by NTU's White and Tokyo Tech's Vice President for Education Tetsuya Mizumoto, the workshop concluded with an announcement that Tokyo Tech will host NTU for a second joint workshop in November 2016 with the aim of facilitating cooperation in a variety of areas.