Organofluorine compounds are important in the fields of pharmaceuticals, agrochemicals and functional materials, because incorporation of fluorine atoms into organic molecules frequently influences their medicinal actions as well as chemical and physical properties. In particular, difluoromethyl group (CF2H) is an intriguing structural motif, especially in medicinal chemistry, because it may provide a lipophilic hydrogen donor and act as bioisostere of alcohols and thiols.

However, the direct and catalytic incorporation of a CF2H group into organic molecules still remains to be further developed, while several methods have been reported.

Now, Takashi Koike, Munetaka Akita and their colleagues at Laboratory for Chemistry and Life Scienece, Institute of Innovative Research, Tokyo Institute of Technology, have developed a novel and simple protocol for the direct incorporation of the CF2H group into organic skeltons by visible-light-driven photoredox catalysis.

The reactions were performed in the presence of N-tosyl-S-difluoromethyl-S-phenylsulfoximine employed as the CF2H source and fac-[Ir(ppy)3] (ppy = 2-pyridylphenyl) photocatalyst under visible light irradiation (425 nm blue LED lamp).

The photocatalytic reactions of olefins bearing various functional groups with oxygen-nucleophiles such as water, alcohols and carboxylic acids afforded β-CF2H-substituted alcohols, ethers and esters in a regiospecific manner, respectively.

CF2H-containing organic molecules may show medicinal activities superior to those of existing medicines. 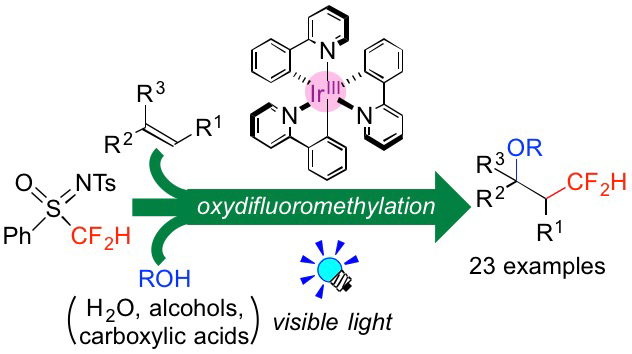