Scientists at Tokyo Tech have demonstrated the potential of a new, thin-film ferroelectric material that could improve the performance of next-generation sensors and semi-conductors.

'Ferroelectric' materials can switch between different states of electrical polarization in response to an external electric field. This flexibility means they show promise for many applications, for example in electronic devices and computer memory. Current ferroelectric materials are highly valued for their thermal and chemical stability and rapid electro-mechanical responses, but creating a material that is scalable down to the tiny sizes needed for technologies like silicon-based semiconductors (Si-based CMOS) has proven challenging.

Now, Hiroshi Funakubo and co-workers at the Tokyo Institute of Technology, in collaboration with researchers across Japan, have conducted experiments to determine the ferroelectric properties of an inorganic compound called hafnium oxide (HfO2) for the first time. Crucially, the crystal structure of HfO2 allows it to be deposited in ultra-thin films, meaning it may prove invaluable for next-generation technologies.

Ferroelectric properties stem from the shape and structure of the crystal used. The team knew that an 'orthorhombic' crystal of HfO2 would likely exhibit ferroelectricity. Funakubo's team wanted to pinpoint the material's spontaneous polarization and the Curie temperature (the point above which a material stops being ferroelectric due crystal re-structuring). To do this, they needed to grow a carefully-ordered crystal on a substrate, a process known as epitaxy, which would give them well-defined data on an atomic scale.

From a scientific and industrial point of view, a Curie temperature of 450 ℃ is of great interest, because it means the material could fulfil functions for future technologies. In contrast to many existing ferroelectric materials, the new thin-film exhibits compatibility with Si-based CMOS and is robust in miniature forms.

The material used by Funakubo and co-workers, hafnium oxide (HfO2), had previously been predicted to exhibit ferroelectric properties through first principle calculations. However, no research team had confirmed and examined these predictions through experiments. Funakubo's team decided to measure the properties of the material when it was deposited in thin-film crystal form onto a substrate. The precise nature of the crystal structure enabled the researchers to pinpoint the material's properties in full for the first time.

Their discovery of a particular epitaxial thin-film crystal of HfO2 that exhibits ferroelectricity below 450 ℃ will be of great significance in the field. 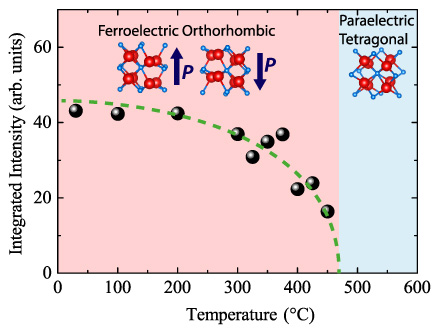 Figure. Integrated intensity of YHO-7 110 diffraction peak as a function of temperature