The guest speaker for the event was Professor Bhanu Das from the School of Science. Das joined Tokyo Tech in 2015 to continue his work on identifying the electric dipole moment of the electron, or the distance between an electron's center of mass and center of charge, the determination of which could have major implications on our understanding of the universe. He has over 30 years of experience in research and education and was elected a fellow of the American Physical Society in 2012 for his contributions in atomic and particle physics and international collaboration. 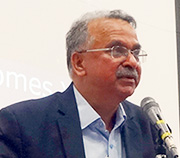 "Tokyo Tech is on the cusp of becoming a truly top-class international university. You will have excellent opportunities to unleash your creative potentials."

In his speech, Das described some of the many opportunities for internationalization offered at Tokyo Tech. One such opportunity was the International Workshop for Young Scientists, organized by the School of Science. The workshop provided students from abroad the chance to attend lectures by physics professors at Tokyo Tech, visit historical locations in Japan, and even attend a special lecture by 2015 Physics Nobel Laureate Takaaki Kajita. Das is also organizing an international workshop on atomic and molecular physics, to be held at Tokyo Tech in September 2016, which will bring together physics experimentalists and theorists from Asia, Europe, North America, and Australia. He concluded by stating that "Tokyo Tech is on the cusp of becoming a truly top-class international university," and that researchers here will have excellent opportunities to unleash their potentials. 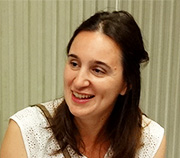 "I hope this trend in innovation and research will attract many international students to come and experience the best offered at Tokyo Tech."

Jovic joined Tokyo Tech in 2008 through the Integrated Doctoral Education Program. Called "Ryu-san" by her colleagues due to the similarity of her name to the word dragon, she did her graduate research on visualization of embryonic stem cell cycles. Now a faculty member, she teaches Creative Collaboration Works on Life Science, a course which requires students from different fields to collaborate to solve a research problem. Asked about her experiences living and working in Japan, she remarked on how Japan has many opportunities for young researchers, particularly in technology, for which Tokyo Tech is globally recognized. She also expressed her hope that Tokyo Tech's achievements in innovation and research will continue to attract students from around the world. 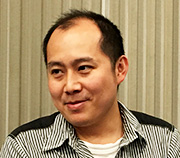 "Tokyo Tech is one of the leading universities in GPU computing in the world. I considered Tokyo Tech to be the best place to continue my research."

Wong joined Tokyo Tech's doctoral program in 2012 as a Monbukagakusho scholar, during which he studied fluid simulations using Tokyo Tech's multi-GPU-accelerated TSUBAME supercomputer. As an adjunct assistant professor, he is now using TSUBAME to study complex fluid-structure interactions. Asked why he initially chose Tokyo Tech, he cited how the Institute was one of the first to construct a GPU supercomputer, referring to TSUBAME 2.0, which won the Gordon Bell Prize in 2011. This led to many groundbreaking achievements and made Tokyo Tech the best place for him to continue his research.

The next Tokyo Tech Welcomes You will be held in January 2017.

International exchange party at the 50th Tokyo Tech Welcomes You