We supported each other and became family - Fall 2016 Graduation Ceremony

The Fall Graduation Ceremony for the undergraduate and graduate students of Tokyo Institute of Technology was held on September 20, 2016. A total of 79 doctoral degrees, 134 master's degrees, 12 professional master's degrees, and 41 bachelor's degrees were conferred. Tokyo Tech Front, the venue for the ceremony, was again filled with graduates' families, friends, and special guests. 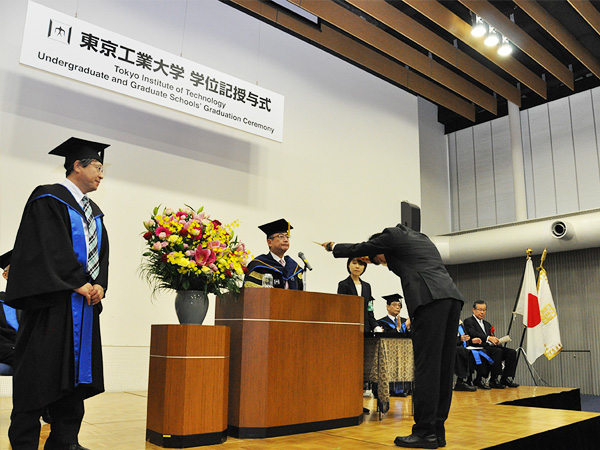 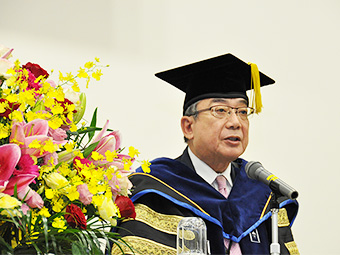 Tokyo Tech President Yoshinao Mishima began with a congratulatory address, acknowledging the achievements of the 266 students and the tireless support provide by their families. He encouraged the fresh graduates to make full use of their abilities, take on new challenges, and continue broadening their horizons as they entered the next stages of their lives. With international students making up well over half of this fall's graduates, the president also gave a special mention to those who had come from abroad to study at Tokyo Tech. 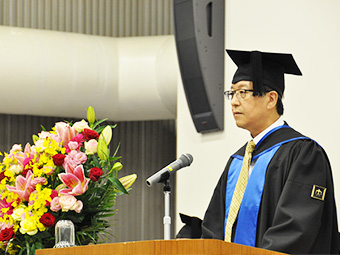 Professor Hisakazu Mihara, dean of the School of Life Science and Technology, continued with his felicitations on behalf of the deans. He urged students to be proud of their newly acquired expertise, and noted that, regardless of the career path they chose, they would likely run into fellow graduates later in life. Mihara reminded all those present that it was the responsibility of every Tokyo Tech graduate to work towards greater sustainability and an improved society.

Mr. Takao Suzuki, executive director of the Tokyo Tech Alumni Association, spoke to the audience about bigger challenges in the future. He encouraged new graduates to continue developing personal connections, as these would help differentiate them from other professionals.

After the conferral of degrees and special diplomas for students in the Program for Leading Graduate Schools, valedictorian and doctoral degree recipient Ho Chen-Wei from the Graduate School of Engineering gave a short speech on behalf of the graduating students. Despite times of adversity, Ho said, the students supported each other, and as a result, became family. He declared that all graduating students recognized their responsibility to create a safer, happier society and contribute to a brighter future.