The theme of each ASCENT focuses on a particular contemporary issue in Asia. According to the theme, participants are offered company visits, laboratory tours at Tokyo Tech, and special lectures and speeches that zoom in on various challenges Asian countries are facing. The program also provides a close-up of Japanese research and technology potentially applicable to solving these challenges. Students work in groups to discuss and debate issues, eventually formulating a conclusion that is presented to the other participants.

ASCENT aims to be a comprehensive program, not only focusing on academic but also cultural activities. Consequently, there are several events such as the cultural exchange party and Japanese culture tour which allow participants to further deepen relationships and bridge cultural gaps.

The 7th ASCENT was held between August 19 and 29, 2016. Previous ASCENTs were held in March, but the program was moved to August starting this year in order to better accommodate participants from universities in the ASEAN region, many of which have recently shifted to the semester system.

The 2016 theme was "Robotics & Asian Society." Twenty participants from Indonesia, Thailand, the Philippines, Vietnam, China, Korea, and Japan worked through a week of lectures, company visits, and discussions, all of which culminated in final presentations held on August 27.

Each ASCENT program begins with a keynote lecture to give the participants a deeper understanding of the theme of that particular year. This year's invited speaker from the National Institute of Advanced Industrial Science and Technology touched on key issues in Japan and Asia, and explained how robotics is being utilized to provide solutions to an increasingly wide range of problems — from far-reaching societal issues to more personal obstacles faced by many in daily life.

Company visits and lab tours aim to provide participants with a more concrete picture of technology being developed by Japanese companies and related research at Tokyo Tech.

This year, students experienced firsthand the latest robotics technology of Obayashi Corporation's Technical Research Institute and Hi-Bot Corporation. These visits gave students a glimpse of how robots are utilized at construction sites, disaster areas, and factories. Visits to Tokyo Tech's Yamakita Lab and Takeda Lab provided an overview of current research being carried out on the structure and control of robots at the Institute.

The company and lab observations left a lasting impression on a number of students. Many asked questions until the very end of each visit, and one student was inspired enough to create a design for a prototype robot. Another participant was accepted into one of Tokyo Tech's labs. In addition to being an informative week on cutting-edge Japanese robotics, this year's ASCENT was also an effective way to demonstrate Tokyo Tech's continued dedication to the field.

Throughout the program, students were given plenty of opportunities to hold group discussions between the lectures, lab tours, and company visits. The diversity of the participants ensured that issues were considered from a variety of viewpoints. Interim presentations were held before the final presentations to allow students to share their temporary conclusions and get constructive feedback from fellow participants, SAGE members, and Tokyo Tech professors. The week culminated in final presentations during which each group proposed an original robot created to address some of Asia's social problems.

As in the past, academic activities were intertwined with cultural activities. During pre-study presentations early on in the program, each participant gave a talk on social issues and robotics in their own country, allowing the whole group to grasp the overall situation in Asia. During the cultural exchange event, participants immersed themselves in each other's customs, wearing traditional national costumes and creating hand-made accessories specific to each participant's region. The penultimate day of the program was dedicated to a Japanese culture tour, which took everyone to the numerous shrines and the Great Buddha in the historic coastal city of Kamakura. 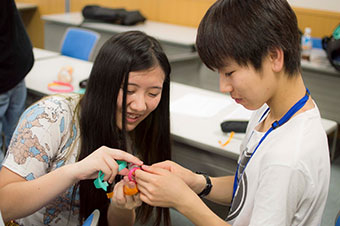 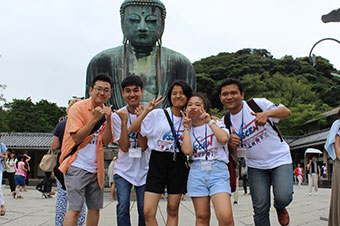 ASCENT was born during the Tokyo Tech-AYSEAS short-term international program in 2008 (then called JAYSES), when Japanese students visiting Southeast Asia were asked about similar programs that would allow them to visit Japan. As a result, SAGE was established, and planning for the first ASCENT began soon after. I was a student leader in Tokyo Tech-AYSEAS 2015. Making use of those experiences as a program participant, I moved on to become the project leader for ASCENT 2016.

The 7th ASCENT welcomed participants from three new universities — Tsinghua University in China, KAIST in Korea, and Hanoi University of Science and Technology in Vietnam. There is still plenty of room for growth in terms of awareness of the program at Tokyo Tech and the potential influence it has on students, and I look forward to seeing the program develop further both in Japan and abroad.

From a personal point of view, balancing my university life and private life for the past year and a half has been very tough at times. However, after seeing the smiles on participants' faces on the last day of the program, I was certain that I had chosen the right path for me.

The 8th ASCENT will be held in the summer of 2017. All undergraduate, master's, and doctoral-level students of Asian universities, including Tokyo Tech, are eligible to apply. Program details and application procedures will be made available through the SAGE website, various social networking services, and email newsletters. Applications from overseas university students will be accepted from March, while Tokyo Tech students can apply in April. All those interested are strongly encouraged to utilize the program as a step towards increased international exchange.