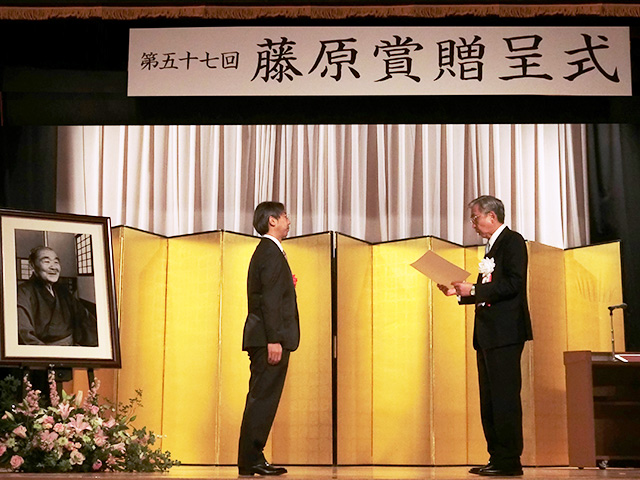 Presenting of the Award

The Fujihara Award was established in 1959 by the Fujihara Foundation of Science. This award is presented to persons who have made an important contribution to the development of science and technology. Two people are selected for this award every year from the fields of mathematics and physics, chemistry, engineering, biology and agriculture, and medicine.

Director Hirose was able to reproduce the high-pressure, high-temperature conditions found deep inside the earth through experiments, and was able to successfully identify the structure, physical properties, and composition of the materials constructing the lower layer of the mantle and the core, which are located deep within the earth and cannot be observed. He also was able to clarify the behavior of these. 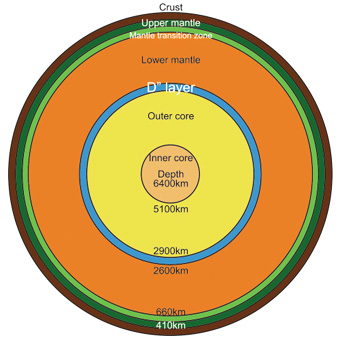 Inside figure of the earth

The radius of the earth is 6,400 km, and the three major layers of the earth starting from the center are the core, the mantle, and the crust. The mantle is further divided into four layers. One of these is the D" layer located at a depth of 2,600 km to 2,900 km in the deepest part of the mantle just above the boundary with the core.

The materials making up the other layers in the mantle have been known since the 1970's. However, the makeup of the D" layer was still unknown at the beginning of the 21st century. 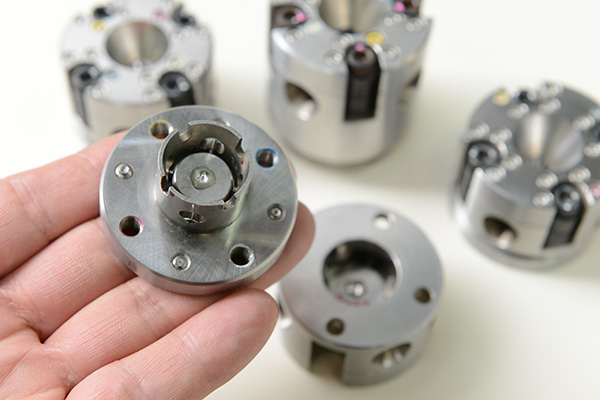 Director Hirose and others with him used diamond anvil cell devices and lasers to conduct experiments in order to reproduce the high-pressure and high-temperature conditions inside the earth to understand the D" layer. They were successfully able to recreate an atmospheric pressure of 125 GPa and a temperature of 2,500 K, which is equivalent to the conditions found at a depth of 2,600 km, and in 2004, they discovered for the first time in the world that the D" layer is composed of "post-perovskite".

This discovery revealed that the "post-perovskite" in the D" layer is a layered crystal structure, and that this has a major influence on seismic wave propagation and mantle convection, as well as rotational movement, etc.

Moreover, in 2010, Director Hirose and others were able to produce a pressure of over 364 GPa and a temperature of 5,000 K, which is equivalent to the conditions found in the center of the earth. They also succeeded in determining the structure of the solid iron that is main component of the inner core. Based on this, they determined that the center of the earth has a structure known as hexagonal closest packing where iron atoms are densely packed together.

In 2014, the existence of the sun's hydrogen was discovered in the earth's core. This indicated that when the earth was formed, there was 80 times more water than what is currently found in the earth's oceans, which was a key to understanding scenarios of the earth's formation and the origin of water.

As explained in the above, Director Hirose developed an experiment technique for reproducing the high-pressure and high-temperature conditions found deep inside the earth, and was able to clarify the structure and composition of the inner earth. His important contributions toward understanding the origin of the earth and its dynamics have been highly evaluated and were the reason for his being given this award. 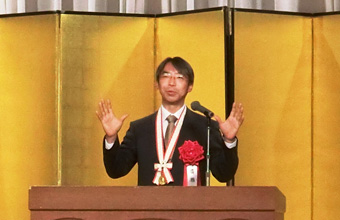 Director Hirose at the Presentation Ceremony

This is a great honor. I thank my colleagues in the laboratory and all those who provided daily support. This has encouraged me to make even greater efforts in the future.

At the Earth-Life Science Institute (ELSI), where I am serving as a Director, our goal is to clarify the origins of both Earth and life through studies of early Earth environment. I hope that receiving this award helps attract researchers from around the world and accelerate our research.

*
This article has been updated to correct units on November 29.