Visit by University of Twente rector 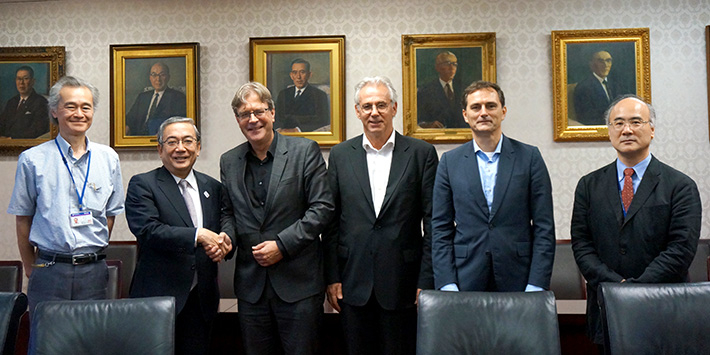 Rector Ed Brinksma and Professor Theo Toonen, dean of the Faculty of Behavioral Management and Social Sciences of the University of Twente, the Netherlands visited Tokyo Tech on October 4 to meet with President Yoshinao Mishima and Vice President for Institute Strategy Isao Satoh. The meeting was attended by International Cooperation Division Head Akira Aoki and Mr. Rob Stroeks, Senior Advisor Innovation, Embassy of the Kingdom of the Netherlands.

The day before the meeting, Brinksma and Toonen attended the Science and Technology in Society (STS) forum University Presidents' Lunch Meeting, which was co-chaired by Mishima and moderated by Satoh.

After welcoming the visitors, Mishima shared a brief overview of Tokyo Tech, highlighting the Institute's new education system, launched this past April. Now organized around six Schools and twenty Departments, the new system provides greater continuity in the curricula from bachelor's to master's programs and master's to doctoral programs such that each student's progression is based on achievement instead of year of study. 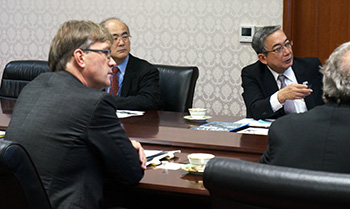 Mishima then explained that the liberal arts curriculum was expanded to include graduate-level courses, thereby providing coursework in the liberal arts right through the doctoral programs. By encouraging all students to study the humanities, social sciences, and foreign languages in addition to their specialized courses of study, Tokyo Tech aims for its graduates to apply broad perspectives, flexible mindsets, and creativity to their research and other work. Brinksma expressed interest in Tokyo Tech's liberal arts curriculum, particularly in the courses offered at the doctoral level.

Rector Brinksma then gave a brief introduction of the University of Twente, which was established in 1961 and now has about 9,600 students, an enrollment close to that of Tokyo Tech. Brinksma explained that the university has incorporated entrepreneurial concepts in its programs since the 1980s and has launched about 900 companies, including Booking.com. In addition, he described Twente's integration of the liberal arts in the sciences and engineering by using project-based education to encourage students from different disciplines to work together and learn from each other. Twente's six research institutes include MESA+, one of the world's leading institutes for nanotechnology.

Before the meeting with Mishima, the delegation visited the laboratory of Professor Toshimasa Fujisawa of the School of Science to learn about Fujisawa's research on quantum states in semiconductor nanostructures, and to discuss possible collaborations.

Based on the understanding of each other's education and research activities developed through the visit, further cooperation between Tokyo Tech and the University of Twente is anticipated.