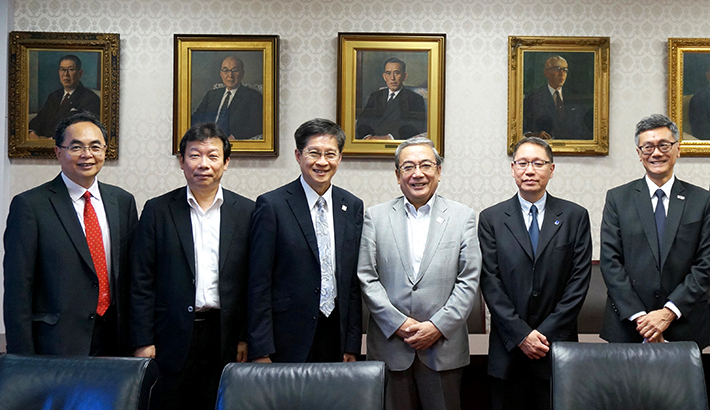 Representatives from leading universities and the Agency for Science, Technology and Research (A*STAR)* of Singapore met with President Yoshinao Mishima and Vice President for International Affairs Hidetoshi Sekiguchi on September 26, 2016.

After Mishima welcomed the group, Huan presented an overview of Singapore's economy and research strategies and introduced A*STAR, which was established to advance science and develop innovative technology in the nation-state. The visit to Tokyo Tech was organized by A*STAR to share information about research opportunities in Singapore for international students. Huan introduced three scholarship programs managed by the A*STAR Graduate Academy on behalf of NUS, NTU and SUTD. Huan encouraged participation by Tokyo Tech students in the programs as a means to further academic and research exchanges between Tokyo Tech and the Singaporean universities.

The representatives of NUS, NTU, and SUTD then shared updates from their universities. As partner universities of Tokyo Tech, NUS and NTU have been actively involved in student and faculty exchanges and research collaborations with the Institute for many years. In September 2016, Tokyo Tech and NTU concluded a supplemental Memorandum of Understanding for the promotion of joint research collaboration and are working to further expand research cooperation through joint workshops. Exchanges between Tokyo Tech and SUTD, established in 2010 as Singapore's fourth national university, are also growing, and the two universities concluded a letter of intent in 2015.

President Mishima remarked on the Singaporean universities' efforts in fostering entrepreneurship and innovation as well as their success in recruiting international students, researchers, and faculty members. In his presentation, Mishima described the new education system launched by Tokyo Tech in April 2016 and noted enhancements to the research system through the Institute of Innovative Research (IIR), a newly established umbrella organization for Tokyo Tech's research institutes, units, and labs. He also mentioned the university's collaborations with industry and introduced the Global Scientists and Engineers Program, a newly established bachelor's degree program in engineering, which is conducted in English.

As the meeting concluded, Mishima and the delegates from Singapore confirmed their intent to further strengthen exchanges between Tokyo Tech and its partners in Singapore.

Following the meeting, the delegation participated in a lab tour led by Vice President for Education Tetsuya Mizumoto, who is also a professor in the School of Engineering. The delegates then attended a Tokyo Tech event to promote study abroad in Singapore and introduced A*STAR's scholarship programs to Tokyo Tech students.

*
The Agency for Science, Technology and Research (A*STAR) was established in 2002 and is a key public-sector agency for science, technology and research in Singapore. The agency is comprised of the Biomedical Research Council (BMRC), the Joint Council Office, the Science and Engineering Research Council (SERC), and the A*STAR Graduate Academy. 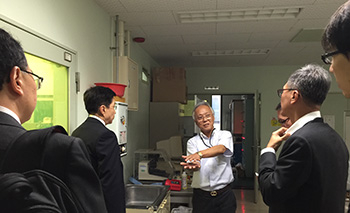 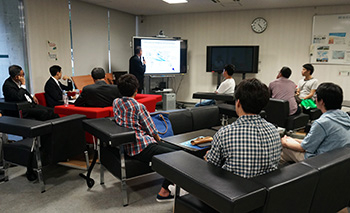 *
This article has been updated to correct an error in date on January 11.