Tokyo Tech master's student Batchunag Dashdemberel and his team won the Best Hack Award at JPHACK 2016, the biggest student hackathon in Japan, for the creation of Cookbot.

is a smart phone application which proposes cooking recipes to its user using a photograph of the available ingredients. The user takes a single photo of the ingredients and, using image recognition, the app then recommends various possible recipes containing those ingredients. Once the user has selected a recipe, the app then guides the user through the cooking process. 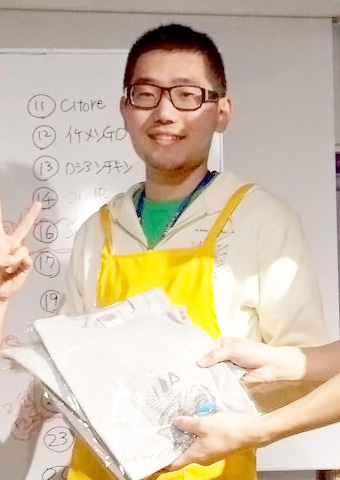 I have been joining programming contests since my undergraduate days, but only got interested in and starting joining hackathons at the graduate level due to their creative nature. The challenge is to take an idea and quickly create a specific application from it using past experience and knowledge.

The finals for the JPHacks 2016 were held on November 19 in Hokkaido, Sendai, Tokyo, Nagoya, Kobe, and Fukuoka. With the number of participating teams increasing every year, I am truly happy to have won this award. Our team, Ants, consists of four Mongolians — two from Tokyo Tech and two from the University of Tokyo.

Cookbot is a chatbot for Facebook Messenger that proposes recipes based on a photo of the user's ingredients. The idea is very simple, and the app itself still needs improvements, but I believe we were rewarded partly for how quickly we completed this project.

*
This article has been updated to correct a typographical error on January 25.