Ohsumi arrived in Stockholm on the first day of this special week. His itinerary included giving a lecture on the following day in addition to attending the Nobel Prize Award Ceremony and various other events.

Reporters started gathering in front of Grand Hôtel Stockholm from eight in the morning to witness the professor's arrival. Tokyo Tech staff were also made to wait in anticipation for the Nobel Laureate, who was running late. When the car carrying him and his wife, Dr. Mariko Ohsumi, finally came into view, it was already past ten o'clock. As he walked to the entrance of the hotel, Ohsumi told reporters that he was very much looking forward to taking part in the week's events. 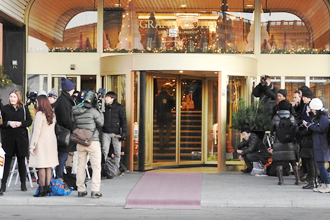 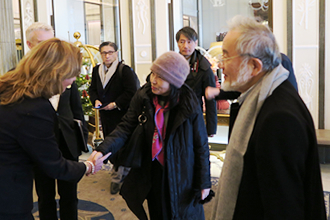 Ohsumi (right) and his wife (center) upon arrival at hotel

That afternoon, Ohsumi visited Hans Allde, a tailor in Stockholm, to hire a tailcoat to wear at the awards ceremony and banquet. Established in 1949, the tailor is now run by the founder's grandson Lars Allde, who was there to greet the professor. Mr. Allde seemed very pleased to see the third consecutive Nobel Prize go to a Japanese scientist. 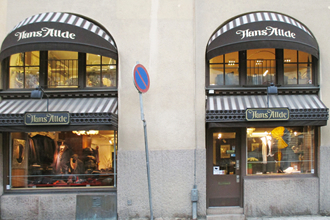 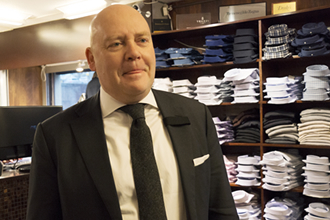 Later in the evening, Mishima, who was invited to attend the awards ceremony and banquet as a guest of Ohsumi, also arrived at the Grand Hôtel. He and other guests collected their programs and tickets for the week's events at the Nobel Desk, a special reception desk at the hotel dedicated to the week's festivities and guests. 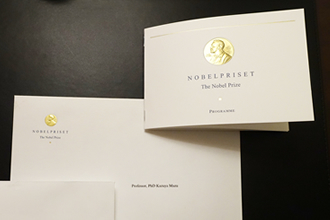 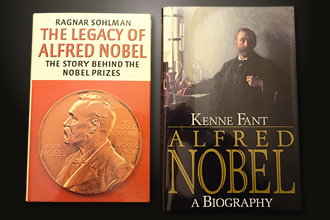 The Nobel Lectures are held on the days leading up to the main ceremony, and December 7 was the day set for Ohsumi to deliver his talk. He had spent the past few months following the Nobel announcement carefully crafting and refining the content of his talk.

The chosen venue was the Aula Medica hall at the Karolinska Institutet — an iconic, avant-garde architectural structure that stands out from the surrounding traditional buildings. The heightened interest in the lecture was evident from the long queue that formed outside the building, and the large lecture hall filled to capacity soon after the doors opened. As Ohsumi came on stage to deliver his lecture, the enthusiasm that pervaded the hall was almost palpable. 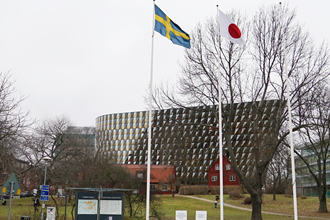 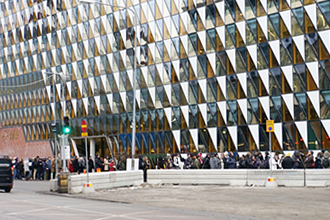 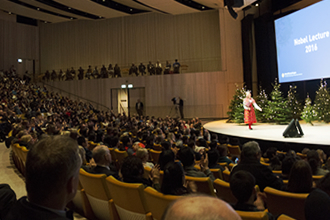 The professor began with a narrative about his early, formative years that led him to become a scientist, and then spoke in detail about the groundbreaking discoveries that revealed the mechanisms of autophagy, which won him the Nobel Prize. Following this, he went on to describe the subsequent efforts that have spread worldwide in the study of autophagy. When Ohsumi finished his hour-long lecture, he was met with a standing ovation from the audience. 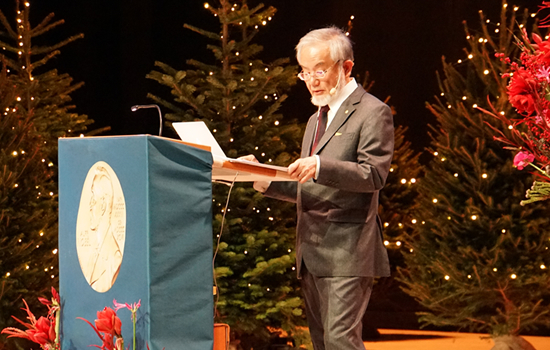 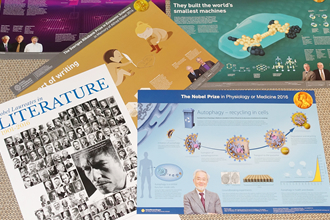 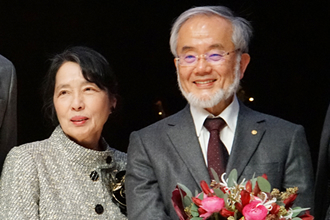 Ohsumi with his wife on stage after lecture 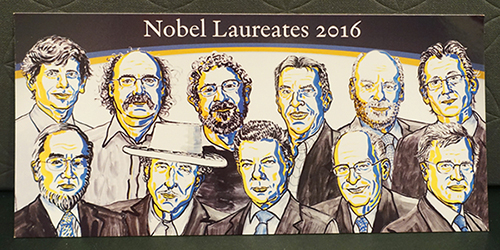 Note: A detailed account of the lecture written by Assistant Professor Alexander May is available at Tokyo Tech News: Professor Ohsumi gives Nobel Lecture in Stockholm.

A reception hosted by the Nobel Foundation followed. Ohsumi, appearing more at ease after the successful lecture, spent time conversing with other attendees, happily obliging to have the occasional photograph taken. 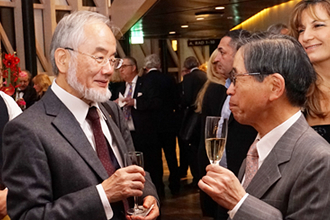 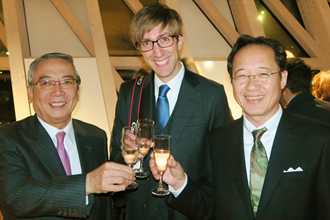 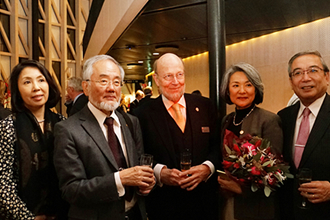 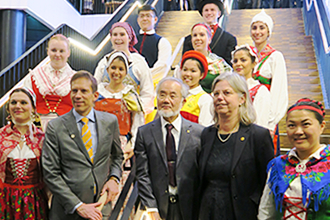 On the morning of December 8, Ohsumi visited the Nobel Museum to follow the tradition of laureates signing a chair in the museum cafe. 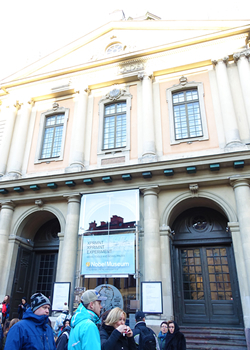 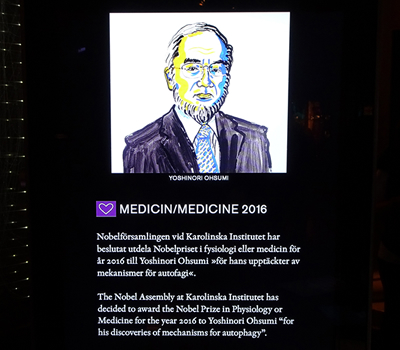 He signed his name, in both English and Japanese, on the same chair signed last year by Distinguished Emeritus Professor Satoshi ?mura of Kitasato University, the 2015 Nobel Laureate in Physiology or Medicine. 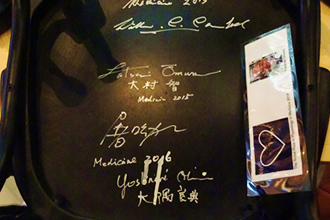 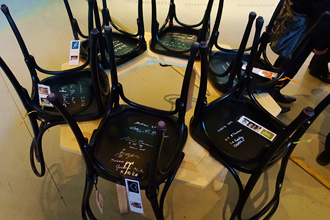 The professor also donated two items, which he had received as gifts from people affiliated with his laboratory, to the Nobel Museum. One of them, a figurine of himself using a microscope, was given to him in June 2015 to celebrate his seventieth birthday and to congratulate him on winning the 2015 Canada Gairdner International Award. The figurine depicts Ohsumi observing autophagy in yeast cells for the first time in history. The other item was a molecular structure model related to his Nobel Prize-winning research theme of autophagy, which was he received at a celebratory reception when he won the Kyoto Prize in November 2012. 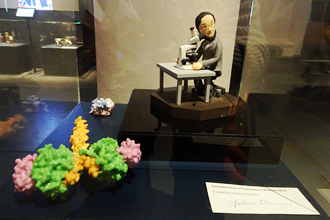 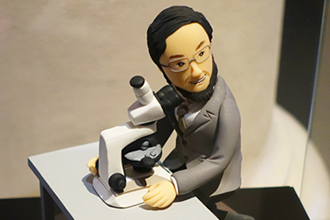 In the museum shop, a silver necklace resembling the molecular geometry of an autophagy-related protein (which was determined by a researcher who worked in collaboration with Ohsumi) was on sale for about 30,000 yen. Visitors from Tokyo Tech, including the professor himself, bought chocolate Nobel medals as souvenirs. 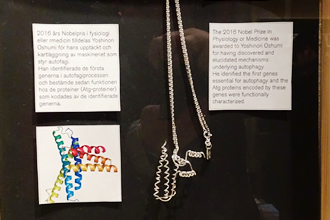 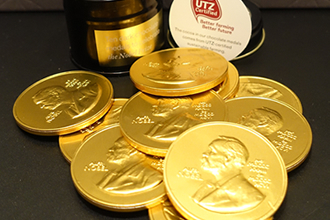 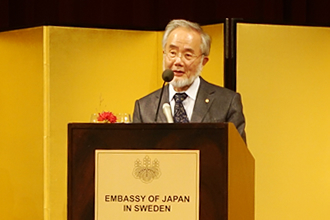 Ohsumi's speech after his Nobel Lecture

In the afternoon, the professor attended a celebratory reception held at the Embassy of Japan in Sweden. Ohsumi and his wife looked like newlyweds when they made an appearance on a terrace opposite the main stage. The professor gave a speech to an excited audience about his feelings following his Nobel Lecture. 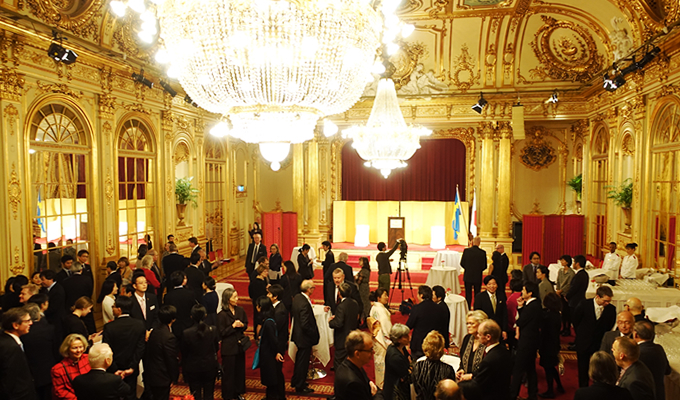 After exchanging greetings, Ohsumi handed a bottle of Japanese sake to Ambassador Extraordinary and Plenipotentiary Mr. Jun Yamazaki. The label on the bottle incorporates illustrations of autophagy.

Guests from Japan and other countries then congratulated Ohsumi and waited in line for a photograph with him.

Following the reception, Ohsumi and his wife attended a press conference for Japanese journalists. At the conference the professor explained, "I talked about autophagy in the lecture, but it was very difficult to cover everything in the limited time frame, because the research area is so wide." He added, "I'm very fortunate to have wonderful lab mates, and I'm still learning a lot from 'lessons from yeast' — my research credo." Commenting on the future, he said, "We won't make progress in science if the number of young researchers who surpass their seniors doesn't increase." Mariko Ohsumi said she was relieved her husband had finished his lecture and that she was looking forward to enjoying the rest of the Nobel Week festivities. 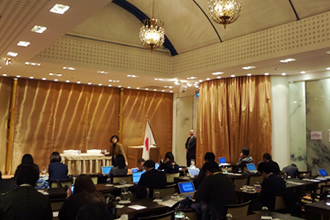 In the evening, Ohsumi attended the Nobel Prize Concert held at Stockholm Concert Hall. The audience was enthralled by the performance, dynamic conducting, and beautiful violins. The professor also seemed to have enjoyed the concert, commenting, "I had a wonderful time." 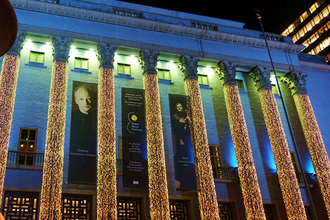 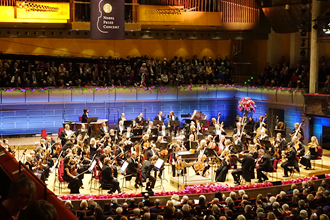