For details of the first half of Nobel Week, read Part 1 of the journal.

Ohsumi and his wife, Dr. Mariko Ohsumi, began the fourth day of Nobel Week with a relaxing breakfast at the Grand Hôtel, occasionally exchanging words with acquaintances who visited their table.

Mishima's morning started with a visit to the Nobel Museum. He bore a gift — a bottle of Japanese sake with an illustration of autophagy printed on its label — that Ohsumi had been unable to bring to the museum on the previous day. The museum director was unfortunately absent, but a member of the museum staff acted on his behalf and graciously accepted the gift. 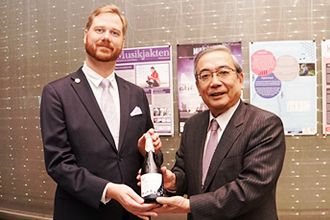 After returning to the hotel, it was time to give an interview to the Japan Broadcasting Corporation. Mishima spoke to the reporter about how the award had prompted Tokyo Tech to consider ways of supporting and encouraging young researchers to follow in the footsteps of Ohsumi.

In the evening, Ohsumi attended a reception at the Nordic Museum, hosted jointly by the Nobel Foundation and the Royal Swedish Academy of Sciences. Showing no sign of fatigue, Ohsumi enjoyed the splendor of the evening. 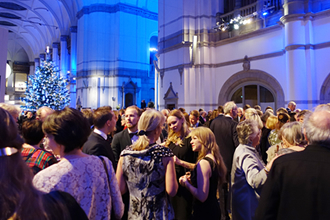 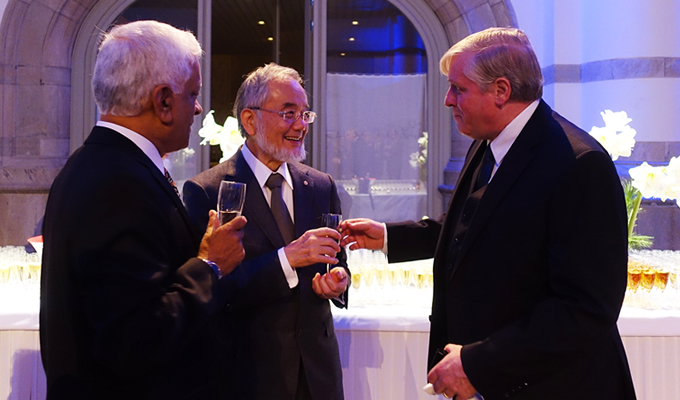 Ohsumi with other guests

This was the big day when the Nobel Prize Award Ceremony and Nobel Banquet were to be held.

Ohsumi spent the morning taking part in a rehearsal for the awards ceremony at the Stockholm Concert Hall. Snow clouded the city that day, but that did not seem to dampen Ohsumi's spirits, and he appeared quite at ease.

In the afternoon, guests began making their way to the Grand Hôtel lobby. Donned in white ties and dresses, they waited for coaches that would transport them to the venue. Mishima and Kazuya Masu, director-general of Tokyo Tech's Institute of Innovative Research (IIR), were among them. After the guests departed, it was Ohsumi and his wife's turn to get into their limousine bound for the Stockholm Concert Hall. 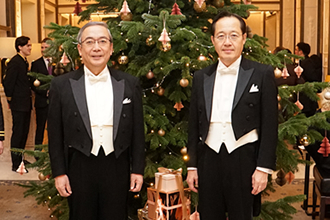 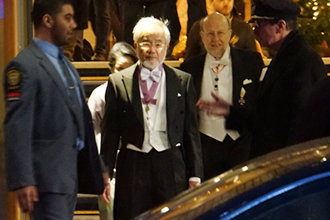 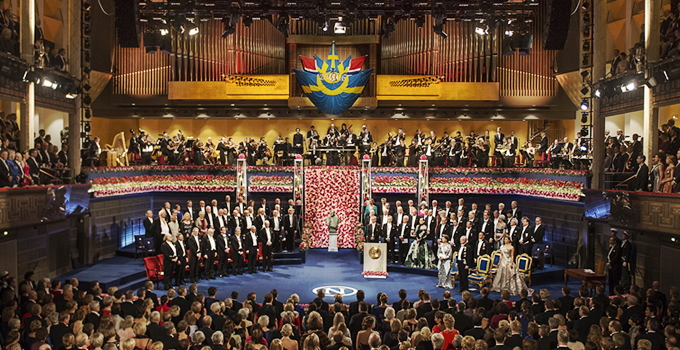 The start of the awards ceremony was marked by the entrance of Sweden's Royal Family on stage, where Nobel judges and members of prize-awarding institutions were waiting. There was a subsequent performance of the Swedish royal anthem, and then, led by Mozart's march, a procession of this year's Nobel laureates took center stage. Ohsumi was wearing the Cultural Medal awarded to him in November.

After an opening address by the Chairman of the Board of the Nobel Foundation came the presentation of the Nobel Prizes. The Nobel Prize in Physics was awarded first, followed by Chemistry, and then Physiology or Medicine. A speech in Swedish was delivered by a Nobel Committee member on Ohsumi's achievements on autophagy, and following that, he was called to step forward to receive his prize from King Carl XVI Gustaf of Sweden. Ohsumi accepted his medal and diploma firmly with one hand, shaking the king's hand with the other. What thoughts must have gone through his mind at that moment. 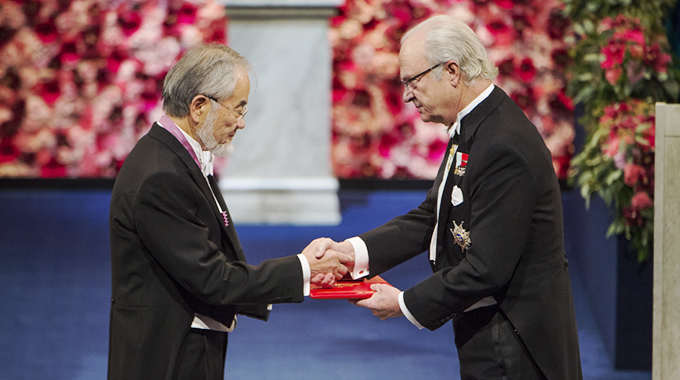 Patti Smith attended the awards ceremony on behalf of Bob Dylan, who won the Nobel Prize in Literature. She gave a moving rendition of A Hard Rain's A-Gonna Fall accompanied by guitar and orchestra. Finally, the Prize in Economic Sciences was presented, and the dignified, hour-and-a-quarter-long ceremony drew to a close with the Swedish national anthem performed by the orchestra.

A banquet at Stockholm City Hall followed soon after the awards ceremony. 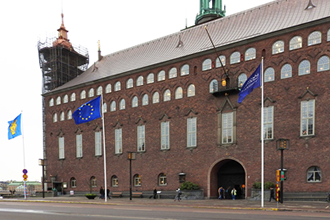 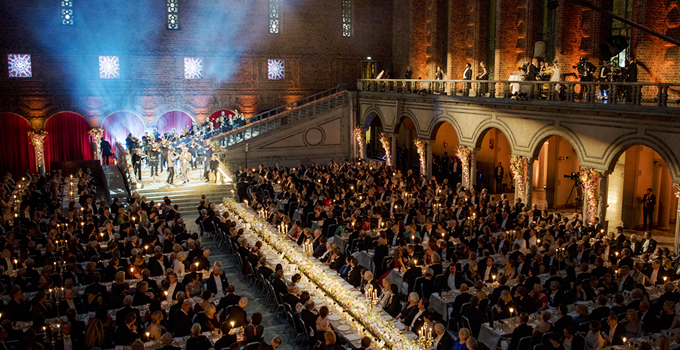 The resounding trumpet fanfare in the Blue Hall announced the entrance procession of the Swedish Royal Family, Nobel laureates, and other guests of honor, who descended the grand staircase decked with flowers. Once they were seated at the Table of Honor, the Chairman of the Board of the Nobel Foundation offered a toast to King Carl XVI Gustaf of Sweden, who then responded with a toast to Alfred Nobel. With this, conversations among guests began to flow and dinner was served. The banquet was enlivened with a series of divertissements that included dance, hymns, and orchestral music entwined with a dialog between a clarinetist and flutist.

There was time for thank-you speeches by the laureates as well. When Ohsumi's turn to speak came, the evening's toastmaster introduced him in Swedish, Japanese, and English. From the lectern set up on the staircase landing, Ohsumi drew laughter from the guests by saying how much he benefited from yeast, including his enjoyment of sake and other alcoholic beverages. He also alluded to the prospects of future autophagy research and ended his speech by thanking his collaborators and family for all the support they had given him over the years.

The banquet, in celebration of the Nobel laureates' achievements, was attended by 1,300 guests that included Mishima as well as Ohsumi's research collaborators. The meticulously prepared dinner and entertainment were enjoyed by all who attended. 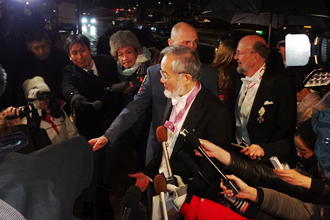 When Ohsumi finally returned to the Grand Hôtel, it was already half past eleven. He looked glad to have completed the long, momentous day.

Next, he visited a Japanese school in Stockholm where he talked to the children about the importance of maintaining curiosity. He presented an autograph with the following message: "The joy of learning comes from keen observation." 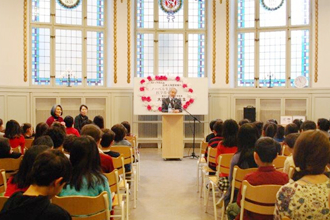 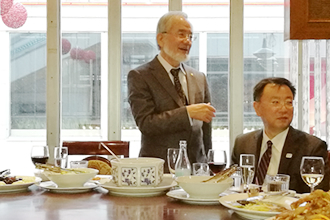 Ohsumi, together with his wife, then attended a luncheon hosted by Hirokazu Matsuno, Japan's Minister of Education, Culture, Sports, Science and Technology. Mariko Ohsumi's words during the event were particularly poignant. She explained how her husband's life in research was never plain sailing, and that there was a time when his parents became very worried. Although his parents did see Ohsumi's research get on track before passing away, she still found the awards ceremony highly emotive, knowing how proud they would have been had they witnessed the event. 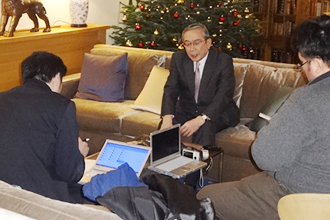 Mishima spent the afternoon talking to the press. He told reporters how, in response to Ohsumi's call for greater support for young researchers, Tokyo Tech was considering setting up a tentatively named Ohsumi Fund through its funding framework.

A Royal Banquet Dinner awaited Ohsumi in the evening. Clad in white tie and a kimono once again, Ohsumi and his wife were whisked off in their limousine to the Royal Palace. 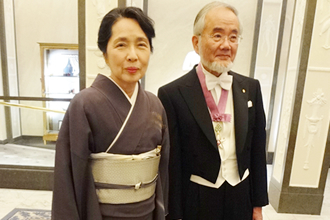 The Royal Palace of Stockholm

The last day of Nobel Week was tightly packed with engagements for Ohsumi.

The early part of the morning was spent giving interviews, where he spoke of his wish to set up a fund for young researchers. Following that, he visited the Nobel Foundation to retrieve the Nobel diploma and medal. 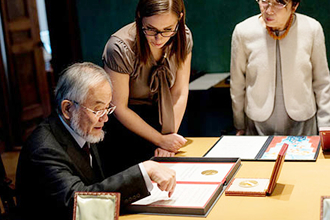 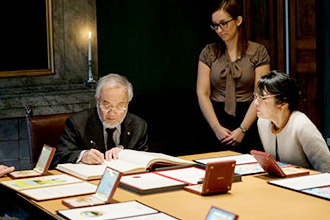 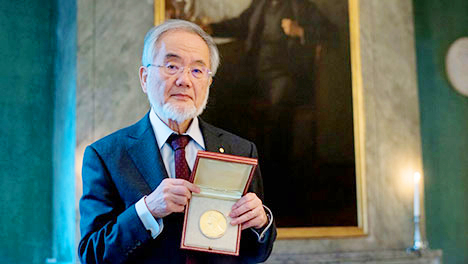 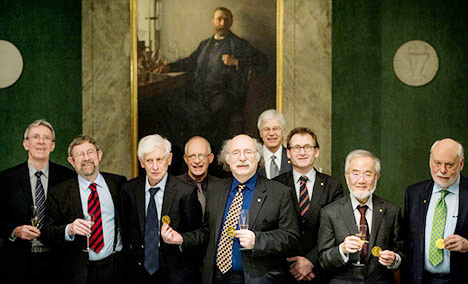 Mishima used his morning to pay homage at the grave of Alfred Nobel in Stockholm. The cemetery was covered in white snow and Mishima had to trudge his way to Nobel's headstone, where he expressed his gratitude for Ohsumi's award.

Following that, he was to meet Tokyo Tech students on a study abroad program at the Royal Institute of Technology of Sweden. Kozuka and Kanamori, first year master's students majoring in Mechanical Engineering and Life Science and Technology respectively, had been in Sweden since summer and had many tales to tell about studying abroad. 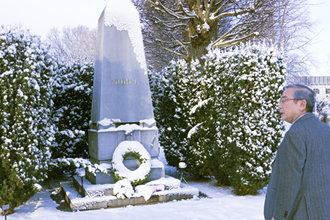 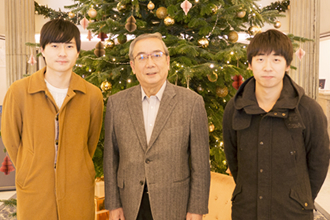 At midday, Ohsumi had lunch with the Pro-Vice-Chancellor of the Karolinska Institute. When the evening came, he visited the Nobel Foundation once again to attend a reception that was to be his last formal event in Sweden.

What seemed like an interminable week was finally over. It must have been the intensity of the marathon of events that led Ohsumi to question how many days he had actually spent in Sweden. Many of the guests at the Grand Hotel were now leaving.

The only task remaining for Tokyo Tech staff who accompanied Ohsumi was to make one final visit to Ms. Sofia at the Nobel Desk to thank her for all the hospitality they had received.

Note: For details of the press conference Ohsumi and his wife gave on their return to Japan at Haneda Airport, read the Proceedings of Press Conference Held on Return from Stockholm (Japanese).