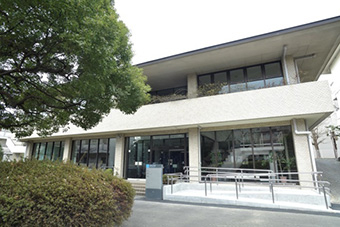 Main building of Tokyo Tech International House,
where the nursery is located 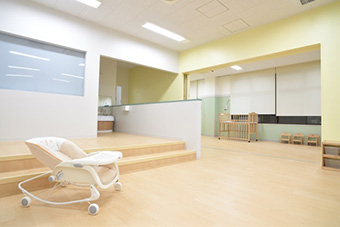 Peace of mind for parents

With the establishment of international research hubs such as the Earth-Life Science Institute (ELSI), the number of researchers joining Tokyo Tech is rapidly increasing. Many of these outstanding international researchers come to Japan with their young children, but are dismayed by the complexity of the local childcare system. International students who are raising children or who give birth in Japan sometimes return home because they cannot find suitable childcare facilities for their young ones. This is sometimes the case with domestic researchers who move to Tokyo from far away, or older students who decide to return to graduate-level studies at a time that coincides with childbirth or childrearing. To alleviate some of these concerns, Tokyo Tech established the Tech Tech Nursery, which welcomes children of Tokyo Tech students, staff, and researchers at any time of the academic year.

An increasing number of faculty members and researchers giving birth in the middle of the academic year feel that they simply cannot afford to take childcare leave. Unfortunately, after their child is born, many of these talents have no choice but to wait until the beginning of the following academic year to enroll their children at a nursery, imposing an unavoidable disruption to their educational and research activities. Tech Tech Nursery also aims to provide relief to these people, ensuring that they can take maternity or childcare leave when they need it, and then return to their professional duties when they see fit.

Tokyo Tech renovated portions of an existing building at the south end of Ookayama Campus to provide space for the nursery. Although established by the Institute, the nursery’s daily operations are handled by Human Life Care Co. Ltd. (President Kazuhiko Noda), a company specializing in early childcare.

The children of Tokyo Tech’s students, researchers, and staff can enter the nursery at any time, but the facility also operates as a normal nursery throughout the fiscal year, providing teachers, nutritionists, and other staff full employment. As part of the Comprehensive Support System for Children and Child-rearing, launched by the Cabinet Office in 2015, Tech Tech Nursery functions as a childcare facility licensed by Ota City, allowing children from the local community to enroll provided that capacity allows it. While the facility can only take in 12 (0-2 years of age) children for the moment, it provides much needed peace of mind to childrearing international students and researchers at Tokyo Tech, and relief to local community parents whose children who are on nursery waiting lists.