A researcher group of Tokyo Institute of Technology succeeded in developing precisely controlled alloy nanoparticles "multimetallic nanoclusters (MNCs)" made of three metals: copper, platinum, and gold. They also discovered that MNCs show catalytic activity that is 24 times greater than commercially available carbon-supported platinum catalysts in the oxidization of hydrocarbons using oxygen in the air. 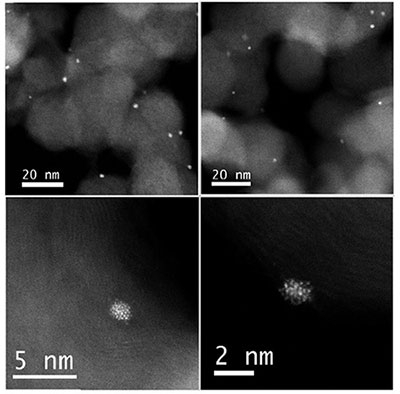 The principal component of petroleum and natural gas are hydrocarbons and their mixtures, and are indispensable as resources supporting modern infrastructure as raw materials for the petrochemical industry. A technique which has been conventionally used to create beneficial chemical products from hydrocarbons was to use a large amount of metallic peroxides in hazardous organic solvents to oxidize hydrocarbon compounds. To use resources effectively and to reduce environmental impact, clean catalytic oxidization without solvents using the oxygen in the air has been a popular research subject in recent years. Research of noble metal nanoparticles supported on porous carbon materials or metallic oxides are especially prevalent, and they are viewed as promising catalysts. Vital elements determining the reactivity of such heterogeneous catalysts are the shape, size, and metallic composition of the metallic nanoparticles. Particles of a size less than 2 nm have especially gained attention in the development of new high-performance catalysts, since it has been found that reducing the diameter of the catalyst particle not only increases the surface area ratio but greatly changes the state of the electrons on the surface of the metals, greatly changing its reactivity. However, the method of synthesizing metallic nanoparticles of such a size while controlling both its diameter and composition had not been discovered.

on the ERATO program, the Exploratory Research for Advanced Technology, research funding program supported by Japan Science and Technology Agency (JST). Molecules called dendrimers have a regular branching structure with only one definite molecular weight although they are classified as macromolecules. The research group implemented many coordination sites for forming metal ions and complexes. By using a dendrimer with such coordination sites as a template for the nanoparticle, the group was able to synthesize a nanoparticle with a controlled number of atoms.

Further, they evaluated the activity of this alloy nanoparticle as an oxidization catalyst for hydrocarbons under ordinary pressures when using oxygen in the air as the oxidizing agent, and found that its activity was 24 times greater than that of commercially available catalysts for oxidization of organic compounds. They also found that, by adding a catalytic amount of organic hydroperoxide, this catalyst promotes the oxidization of hydrocarbon into aldehydes and ketones under ordinary temperatures and pressures. Further, by comparing the changes in activity due to alloy catalysts of different metallic compositions and examining the composition and other characteristics of the intermediates, ketones and organic hydroperoxides, the group was able to observe the process of reaction promotion due to the alloying of the catalyst. 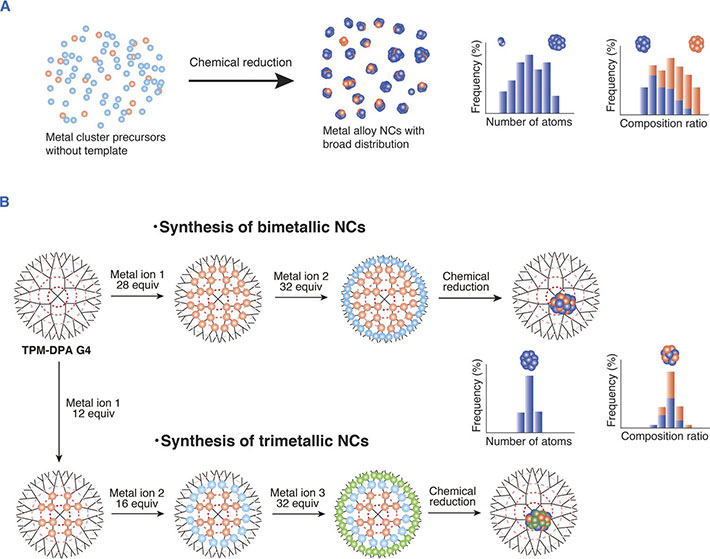 The catalytic transformation of inactive hydrocarbons to substances with higher added value is a technology garnering much attention in recent times. The knowledge gained from this research is anticipated to become a design guideline for new high-performance catalysts. The method for synthesizing alloy nanoparticles developed in this research can be used generally and applied to other metals. For this reason, this could be said to be the technology uncovering the reactivity of other microscopic alloy nanoparticles, whose catalytic performance had not been known. Further study is required on the increase of catalytic activity at the interface of copper and other noble metals in the oxidizing transformations of other organic compounds, not only the oxidization of hydrocarbons. Application is anticipated for next-generation high-performance materials in the fields as diverse as optics, electronics, and energy.