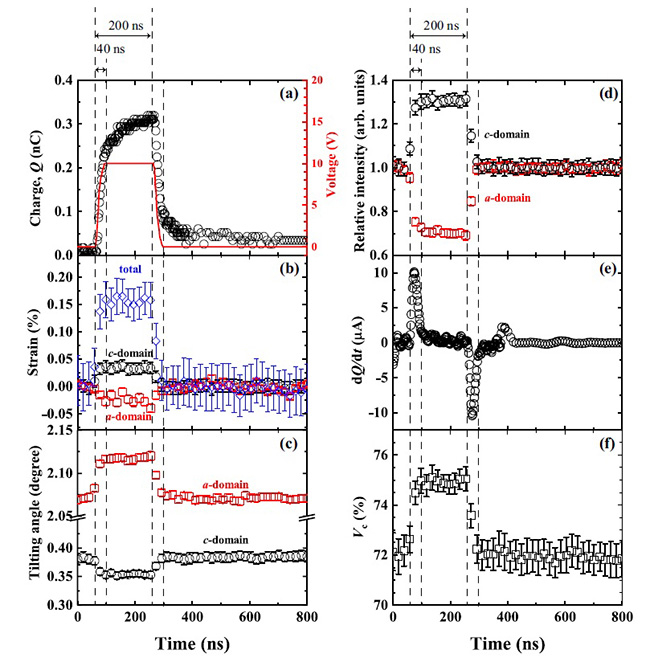 The (a-f) capacitance, strain, tilting angle, intensity, difference capacitance, and volume fraction of the c domain were measured as functions of time, respectively. The elastic deformation and ferroelastic domain switching were completed within 40 ns.

Piezo micro electro mechanical systems (piezoMEMS) are miniaturized devices exhibiting piezoelectricity, i.e., the appearance of an electric charge under applied mechanical stress. These devices have many diverse applications in energy harvesters, micropumps, sensors, inkjet printer heads, switches, and so on. In permanently polarized (ferroelectric) materials, ferroelastic domain switching affects the piezoelectric properties significantly, and this behavior can be exploited for piezoMEMS applications.

However, before the recent investigation, the speed of this 90° domain switching was unknown. In addition, the relationship between the speeds of the lattice deformation and ferroelastic domain switching had not been determined. To investigate these speeds, the research team led by Hiroshi Funakubo examined the switching behavior of Pb(Zr0.4Ti0.6)O3 thin films under applied rectangular electric field pulses.

To observe the changes in the lattice and the domain structure, time-resolved in situ synchrotron X-ray diffraction was carried out in synchronization with a high-speed pulse generator. These observations were performed at the BL13XU beamline at the SPring-8 synchrotron radiation facility. The electric field pulses were applied to the PZT thin films through Pt top electrodes, which were fabricated on top of the films.

Investigation of the diffraction peaks in the PZT thin films revealed elongation of the surface normal c-axis lattice parameter of the c-domain with a simultaneous decrease in the surface normal a-axis lattice parameter of the a-domain under the applied electric field. The intensities of the diffraction peaks also changed under the electric field. These observations provided direct evidence of 90° domain switching.

To determine the switching speed, the lattice elongation and domain switching behaviors were plotted as functions of time (Figure 1). These plots revealed that these processes were completed within 40 ns and occurred simultaneously in response to the applied electric field. The switching behavior was also shown to be perfectly repeatable.

The high-speed switching observed in these experiments was limited by the present electrical equipment, but is faster than that reported in previous studies. Further, this high-speed 90° switching is reversible and can be used to enhance the piezoelectric response in piezoMEMS devices by several tens of nanoseconds. Therefore, this finding is of considerable importance for the ongoing development of ultrafast electromechanical switches and sensors.