Researchers at Tokyo Institute of Technology (Tokyo Tech) discovered a new electride1 with electrons that acts as anions in intermetallic compounds2. The electrons exist in the spaces within the crystal structure of these compounds at a high concentration. Their energy levels are near the level at which controls electronic properties. These materials may lead to emergence of catalytic activity for ammonia synthesis and super conductivity.

An ionic crystal is composed of positive ions (cations) and negative ions (anions). A compound in which electrons serve as anions is called an electride. In 1983, the first electride was synthesized from organic compounds, attracting attention as an exotic material. However, the physical properties of this substance remained poorly understood due to its chemical and thermal instability.

In 2003, a group led by Professor Hideo Hosono at Tokyo Tech was the first to successfully synthesize a stable electride in air at room temperature using 12CaO·7Al2O3 (a constituent of alumina cement). They reported the unique physical properties of having a low work function3 and being chemically stable, attributable to replacing anions with electrons. They developed the new field of the material science of electrides through reported findings on electride glass in 2011, and a two-dimensional electride Ca2N in which anionic electrons lie between layers in 2013. This research has tried to further expand the concept of electrides by studying the relationship of crystal structure and electron distribution in intermetallic compounds formed from metallic elements, discovering a group of substances viewed as electrides, and finding how these lead to developing physical properties such as ammonia synthesis catalysis and superconductivity. These results were published in Advanced Material issued on July 31, Angew. Chem. Int. Ed. issued on August 14, npj Quantum Materials issued on August 15.

The parent compound of electrides found to this point has been insulators. In recent years, theoretical research into electrides has been thriving globally. It is becoming clear that typical metals such as alkali metals are electrides in which electrons occupy interstitial sites in the high-pressure phase.

This research has explored electrides in intermetallic compounds formed from matrices with multiple metals. In normal metals, electrons are distributed averagely throughout the lattice, making it unlikely that electrons exist interstitially at high concentrations. In that context, the researchers focused on and explored intermetallic compounds composed of multiple distinctive metals. The researchers thus discovered that LaScSi (Lanthanum Scandium Silicon), Mg2Si (Magnesium silicide), Nb5Ir3 (Niobium iridium), and other compounds fall under this category.

For example, in the case of LaScSi, two electrons (1.6x1022 cm-3) equivalent to its formula weight occupy the center position of the tetrahedron created by Lanthanum (La) and the octahedral site created by Scandium (Sc) and Silicon (Si). Since either site can be replaced by hydride ions (H-), it can be viewed as an electride in which electrons act as anions in place of H-. The bands in which these electrons exist contribute greatly to the Fermi level4. Furthermore, this substance demonstrated excellent properties as an ammonia synthesis catalyst when supported with ruthenium nanoparticles. 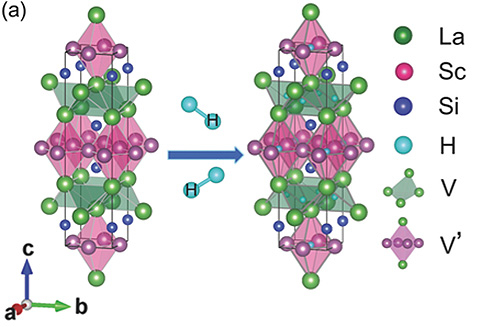 Electrons exist in the V and V' sites. When reacted with hydrogen, H- ions are occupied in place of electrons.

The thick lines indicate the contribution of electrons at interstitial sites. On the right is the electron density distribution near the lower end of the conduction band. Electrons exist in the space enclosed by 8 Mg.

Mg2Si is a semiconductor with antifluorite5 crystal structure which shows n-type conductivity, and is known as a substance with strong thermoelectric properties. The electron density distribution shows that a large peak exists at the center site of the tetrahedron enclosed by four Mg2+ ions at the lowest end of the conduction band. In other words, the researchers learned that electron carriers generated by the loss of Silicon (Si) occupy this interstitial site. This type of semiconductor substance was previously unknown, and is thought to be connected to the origin of thermoelectric properties.

In this research, the new intermetallic compound Nb5Ir3 with Mn5Si3 type structure was synthesized. This showed that there is a one-dimensionalized channel composed of Nb atoms in the crystal structure, and that it is an electride with anion electrons existing within. The Tc (critical temperature) of this substance, which indicates superconductivity, was 9.4 K. An electride superconductor was found in 2007 in C12A7:e, making this the second case.

The fact that electrons responsible for electrical conductivity are distributed at a high density was previously unknown. In the event that carrier electrons are averagely distributed, the transport properties and chemical reactivity of electrons are expected to be considerably different.

Organic electrides were discovered, then electrides in the classes of inorganic, simple metals, and now intermetallic compounds. It is hoped that more novel electrides will be discovered, and that new physical properties will be found which lead to expanding scientific frontiers and applications.

A compound in which electrons are seen to function as anions.

A compound composed of metals of two or more types of metalloid elements. Since heterogenous elements with differing properties are linked by strong bonds, intermetallic compounds often exhibit unique physical properties distinct from those of the constituent metals or metalloids.

The minimum energy required to extract one electron from the surface to infinity on the material surface.

The highest energy level occupied by electrons in the electronic structure of a solid. Controls the transport properties and chemical reactivity of electrons.