Researchers have performed numerical simulations and compared the results to the composition of the ancient Martian atmosphere trapped in an old meteorite. The researchers have concluded that, 4 billion years ago, Mars had a dense atmosphere whose surface pressure was higher than 0.5 bar (50000 Pa). This suggests that the processes to remove the Martian atmosphere, for example stripping by the solar wind, are responsible for transforming Mars into the cold desert world it is today. 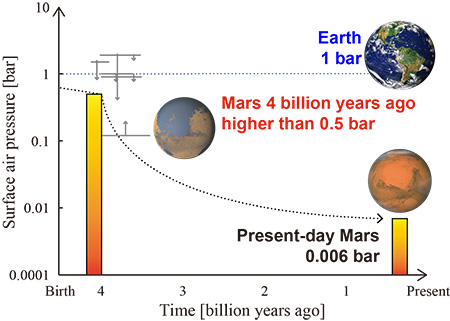 Figure 1. The figure shows how surface air pressure changed throughout Martian history. A bar at 4 billion years ago denotes a lower limit shown by this study. Constraints suggested by other studies are also shown by arrows.

Exploration missions have suggested that Mars once had a warm climate, which sustained oceans on its surface. To keep Mars warm requires a dense atmosphere with a sufficient greenhouse effect, while the present-day Mars has a thin atmosphere whose surface pressure is only 0.006 bar, resulting in the cold climate it has today. It has been a big mystery as to when and how Mars lost its dense atmosphere.

The research team concluded that Mars had a dense atmosphere 4 billion years ago. The surface air pressure at the time was at least 0.5 bar and could have been much higher. Because Mars had its magnetic field about 4 billion years ago and lost it, the result suggests that stripping by the solar wind is responsible for transforming Mars from a warm wet world into a cold desert world.

NASA's MAVEN spacecraft is orbiting Mars to explore the processes that removed the Martian atmosphere. The Japan Aerospace Exploration Agency (JAXA) is planning to further observe the removal processes by the Martian Moons eXploration (MMX) spacecraft. These missions will reveal how the dense atmosphere on ancient Mars predicted in this study was removed over time.