Fourth-year student Riku Akatsu from the Department of Inorganic Materials and Tokyo Tech alumni Ko Matsuda — who together make up the talented Team Tachikawa CSC1 — will represent Japan in the two-player cycle-ball category of the Union Cycliste Internationale (UCI) Indoor Cycling World Championships 2017 to be held in Austria's Dornbirn from November 25 to 26, 2017.

Akatsu and Matsuda secured their place on the world stage after winning the cycle-ball 2017 Champions Cup at Momoyama Gakuin University in Osaka on July 9. The competition was sponsored by the Japan Cycling Federation. 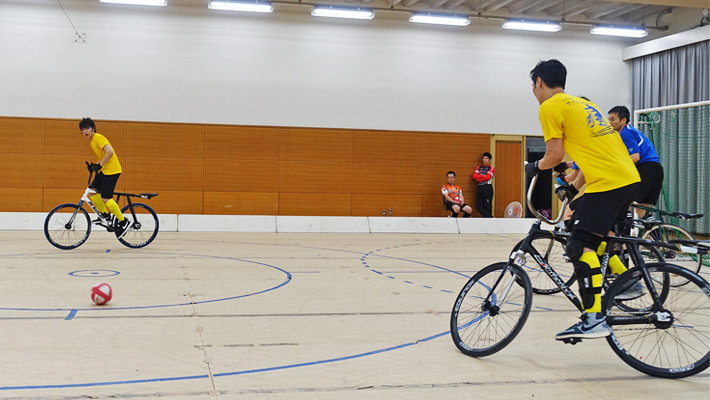 Tachikawa SCS1 in yellow with Akatsu on left, Matsuda on right 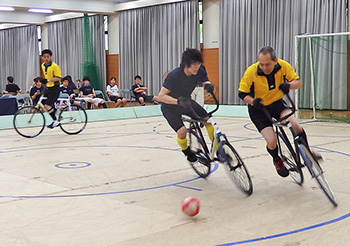 Akatsu (in black) piling on the pressure

I always knew I wanted to represent Japan in this sport, but honestly, I thought that time would come later, not at university. The semifinal in Osaka was a tough clash with the team that had represented Japan in recent world competitions. However, we were able to score the first goal, and that momentum carried through until the end.

In the World Cup, our aim is to win Group B,* the lower of two groups of teams. We still have a few months to polish our skills, and we are really looking to challenge the other teams in Austria.

*
The UCI Indoor Cycling World Championships are divided into two groups — Group A includes the six best nations, while Group B contains another six teams. Japan is currently in Group B. The winner of Group B will play the loser of Group A, and, if victorious, will be promoted to Group A in the following year. Japan has won Group B several times in the past, only to be demoted the following year. 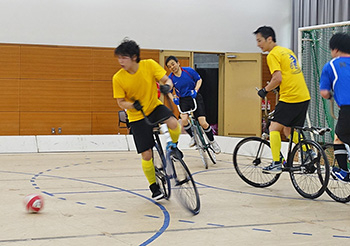 Matsuda’s balancing act in front of the goal

The results of the Champions Cup, sponsored by the Japan Cycling Federation, in fact determine the national representatives sent to two competitions: the UCI Indoor Cycling World Championships, which includes both male and female artistic cycling and cycle-ball, and the UCI Cycle-Ball World Cup. For the latter, qualification rounds and a final tournament took place to determine the ranking of competing teams.

In 2017, 16 teams took part in the Champions Cup. Akatsu and alumni Matsuda, who already has participated in past World Cups, beat the experienced RSV OSAKA in the semifinals and won the whole competition. Although this guaranteed them passage to both the Indoor Cycling World Championships and the Cycle-Ball World Cup, the pair will only be joining the former due to other commitments in December.

Cycle-ball is a soccer-like sport played indoors by two teams of two players each. Five-aside matches outdoors are also possible, but less common. Using a specially adjusted bicycle with no gears or brakes, players dribble, pass, and shoot the ball using the wheels of their bicycles. As most of the action takes place while standing on the pedals, the handlebars face upwards, and the bike also allows players to pedal backwards.

The Tokyo Tech Cycling Club is an official student club that includes members from not only the Institute, but also other universities such as Ochanomizu University and Tokyo University of Foreign Studies. The club consists of a touring group, a racing team, and a cycle-ball team, totaling over 100 members. The cycle-ball team, which includes 22 Tokyo Tech students, alumni, and members of other universities, trains at Ookayama Campus twice a week. In addition to the November world championships in Austria, the cycle-ballers will also take part in the Japan national championships on Saturday, November 11 and Sunday, November 12, and encourage all those interested to come and cheer them on!