Tokyo Tech and Osaka University hosted the 23rd Supercomputing Contest (SuperCon) for high school and technical college students from August 21 to 25. As in previous years, twenty teams who advanced through the preliminary rounds battled it out by creating programs for a supercomputer — this year the SX-ACE of Osaka University.

Ten teams of two to three students from eastern Japan took on the challenge at the Tokyo Tech Global Scientific Information and Computing Center (GSIC), while 10 western Japan teams put their minds to work at Osaka University's Cybermedia Center.

In 2017, Team solars from National Institute of Technology, Kitakyushu College took first prize. The top three teams were awarded medals and certificates. Solars also won the Institute Prize from the Institute of Electronics, Information and Communication Engineers and the Information Processing Society of Japan in recognition of their outstanding algorithm and coding. 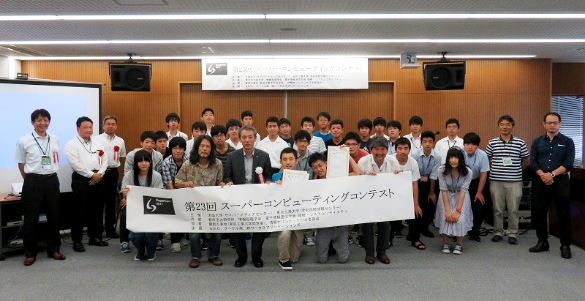