Researchers at Tokyo Institute of Technology (Tokyo Tech) announce a Bluetooth Low-Energy transceiver with the lowest ever power consumption — a breakthrough set to accelerate widespread adoption of Internet of Things (IoT) applications in Japan and around the globe. 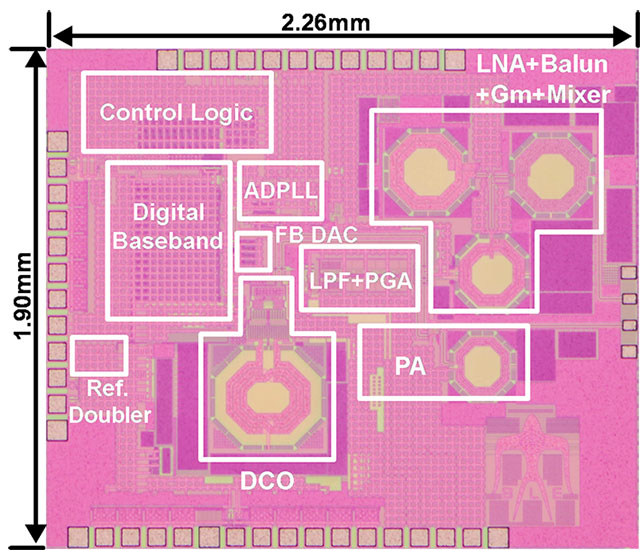 Figure. A photograph of the chip

An ultra-low-power Bluetooth Low-Energy transceiver designed for use in the popular 2.4 GHz band has been developed by a group of researchers led by Kenichi Okada of Tokyo Institute of Technology, Japan.

When transmitting, the transceiver consumes 2.9 milliwatts (mW) and when receiving, it consumes just 2.3 mW. Given that minimizing power consumption is a requirement for the oncoming IoT era, these figures are remarkable, as they represent less than half the power consumed by previous transceivers (see Table).

Tokyo Tech's BLE transceiver achieves a dramatic reduction in power consumption — down to less than half of those previously reported. All figures are in milliwatts (mW).

Within the next decade, IoT is projected to become a multi-trillion US dollar industry. Bluetooth Low-Energy (BLE) is in the spotlight as a key technology spurring the growth of this fast-evolving market. Already embedded in millions of Apple and Android devices, BLE is the most used short-range wireless technology aimed at low-power and low-cost connectivity.

Low-energy solutions are in demand not only for smartphones and watches, but also for emerging applications in the medical and healthcare fields, factories and public infrastructure such as roads, bridges and tunnels. IoT sensors for early detection and warning systems could mean the difference between life and death.

"Our research grew out of this need for connectivity," explains Okada. "In an IoT world, trillions of devices will be used. To extend battery life and aim for maintenance-free operations, reducing power consumption is vital."

The transmitter employs an all-digital phase-locked loop (ADPLL), an attractive building block for BLE, as it is less susceptible to noise compared to its analog counterpart. The transceiver was designed in a 65-nanometer CMOS process3.

In another study focusing on ADPLL, the researchers achieved a figure of merit (FoM)4 of -246 dB, one of the best obtained so far. The FoM is an important metric for evaluating the trade-off between performance and power consumption.

The above results arose from a project supported by Japan's New Energy and Industrial Technology Development Organization (NEDO).

In future, Okada says: "The PLL could operate on just 0.65 mW, and studies are underway to reduce our transceiver's power consumption even further."

The team will present their findings at the 2018 International Solid-State Circuits Conference (ISSCC). Held every February in San Francisco, the conference, popularly known as the Chip Olympics, is regarded as the leading forum on integrated circuit research and development.

A measure of how well a receiver can pick up the tiniest of signals. The figure reached in this study was an impressive -94 decibels relative to 1 milliwatt (dBm).

Referring to the need for high tolerance to interference from other signals operating in the busy 2.4 GHz band.

The FoM evaluates the trade-off between jitter (related to noise in wireless communication) and power consumption. Reducing jitter is desirable for improving the quality of communication, but this requires more energy, so there is a trade-off between performance and power consumption. In general, the lower the FoM, the better. The figure of -246 dB is one of the lowest ever achieved.