More than three times the efficiency of current industrial catalysts

Researchers at Tokyo Tech have discovered that a catalyst of calcium amide1 with a small amount of added barium (Ba-Ca(NH2)2) with ruthenium nanoparticles immobilized onto it can synthesize ammonia at an efficiency 100 times greater than that of conventional ruthenium catalysts at low temperatures below 300 ℃. The performance of this catalyst is also several times higher when compared to iron catalysts currently being used industrially.

Ammonia is a raw ingredient for nitrogen fertilizers and is a key to food production. It is one of the chemicals most produced to support human life. An ammonia molecule is one nitrogen atom bonded with three hydrogen atoms. As a result, ammonia is a substance with a very high hydrogen content for its mass. Because it becomes a liquid at room temperature at a pressure of 10 atmospheres, it is also receiving attention as an energy carrier2 for "hydrogen," the energy source for technologies such as fuel cells.

The Haber-Bosch process, the current industrial ammonia synthesis method (established in 1913) uses a catalyst made mainly of iron and requires high temperatures (400 to 500 ℃) and high pressures (100 to 300 atm). To meet these conditions, ammonia is produced in large, dedicated factories and are then transported to plants over a wide area to be used. There has long been demand for on-site3 production in which the required amount of ammonia can be synthesized where it is required, as opposed to the conventional large-scale process.

The research group at Tokyo Tech, of Professor Hideo Hosono, Professor Michikazu Hara, Associate Professor Masaaki Kitano and others discovered an ammonia synthesis catalyst which functions at high efficiency at low temperatures. They discovered that a catalyst of calcium amide with a small amount of added barium (Ba-Ca(NH2)2) with ruthenium nanoparticles immobilized onto it exhibits catalytic activity 100 times greater than that of conventional ruthenium catalysts at low temperatures below 300 ℃. Further, the catalytic performance of this catalyst is also several times higher when compared to iron catalysts being used industrially (Figure 1). 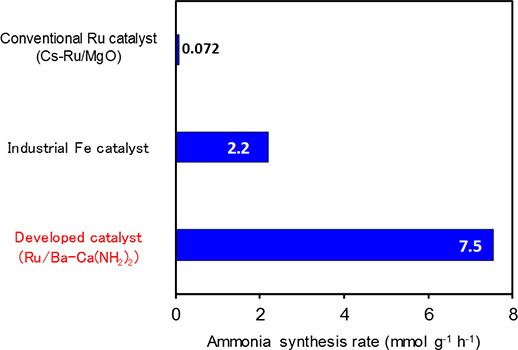 A ruthenium acetylacetonate complex is used as the raw material for ruthenium. By heating a powder mixed with Ba-Ca(NH2)2 to 400 ℃ in a hydrogen atmosphere, a thin barium layer is formed on ruthenium nanoparticles about 3 nm in size, as porous calcium amide is formed concurrently (Figure 2). The surface area of Ba-Ca(NH2)2, the raw material for the catalyst, is only about 17 m2/g. However, since the catalyst becomes porous when heated to 400 ℃ in hydrogen with the ruthenium source, the group found that the surface area expands to approximately 100 m2/g. Further, the barium constituent added to the calcium amide moves to the surface of the catalyst during this heat processing and forms a thin layer by covering the ruthenium nanoparticles. The group discovered that this is a unique catalyst, with such active structures forming in a self-organized4 way and remaining stable throughout the reaction. The catalyst developed in this research exhibits the highest ammonia synthesis activity at low temperatures than any solid catalyst reported in recent years.

A thin barium layer is formed on ruthenium nanoparticles about 3 nanometers (nm) in size during the reaction of this catalyst, as electrons with low work function and porous calcium amide are formed concurrently due to amide deficiency. Both these properties indicate high catalytic activity. The group discovered that this is a unique catalyst, with these active structures forming in a self-organized way and remaining stable throughout the reaction.

The catalyst developed in this research far supersedes the limits of existing catalytic materials in its ammonia synthesis activity and will contribute significantly to reducing energy used for the ammonia synthesis process. Because of this, further developing this technology is expected to lead to a new process structure for on-site synthesis of ammonia.

An energy-reduced production method to produce chemical products as needed where it is needed, as opposed to the conventional method of producing large amounts at large-scale factories.

The manner in which an orderly structure is created autonomously.