The Earth-Life Science Institute (ELSI) Origins Network (EON) held its third annual meeting in Odawara City on January 5 and 6, 2018. EON was instantiated at Tokyo Tech on July 1, 2015 through a generous competitive grant awarded by the John Templeton Foundation, an American philanthropic organization based in Philadelphia. The grant was coordinated by ELSI Professor Piet Hut, who is also a professor at the Institute for Advanced Study in Princeton, USA. Funding for EON's first phase runs until March 31, 2018. 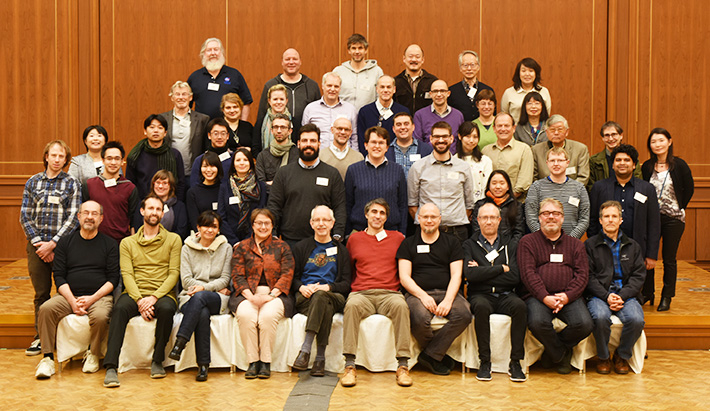 ELSI was founded in 2012 as part of the World Premier International (WPI) Research Center Initiative of Japan's Ministry of Education, Culture, Sports, Science and Technology, and now has two buildings dedicated to cutting-edge research regarding the origins of life and the planets that are able to host it. ELSI is home to roughly a dozen faculty members and several dozen postdoctoral researchers working in areas from astrophysics and geophysics to chemistry and biology, as well as the physics of complex systems and aspects of computational science and high-performance computing.

EON was formed to build a cohesive and lasting global network of researchers working to address questions relating to the origins of life. EON supports research across a wide range of disciplines that contributes to the following questions:

How did life arise on Earth?

How common is life in the Universe?

What fundamental principles explain the emergence of life?

EON has created a global interdisciplinary network, now totaling over 500 members, centered at ELSI for research into the origins of life. Its goal is to bring together existing ideas from different sciences to shape their development, and create a collaborative research community with a global vision which can recognize and ask the next generation of questions in many fields. The EON program was designed to support ELSI's goal to be a worldwide destination for leading-edge research in all aspects of the origins of life, and to internationalize research and higher education in Japan.

Also in attendance were EON's global science coordinators, who help recruit members and publicize EON as an institution, and include scientists from NASA headquarters, Columbia and Harvard Universities, and the NASA Jet Propulsion Laboratory. EON advisory board member Marcelo Gleiser from Dartmouth College presented the keynote talk for the meeting.