Team Maquinista from Tokyo Tech's Society for the Study of Robotics, one of the Institute's student clubs, finished in the top eight at the 2018 NHK Student Robot Contest on June 10. Unfortunately, the team suffered a defeat to Kyushu University in the quarterfinals, meaning they will not be joining the ABU Asia-Pacific Robot Contest in Vietnam in late August. Japan's representative will be the University of Tokyo team, who won the NHK contest. 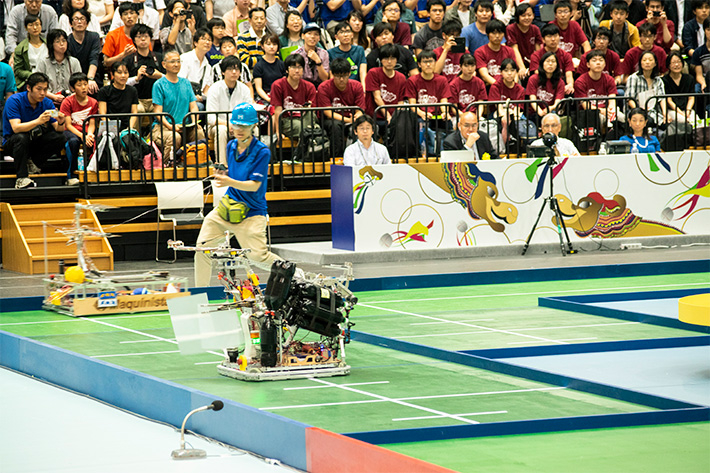 The NHK Student Robot Contest has been held since 1991, and has functioned as the national qualification round for the ABU Asia-Pacific Robot Contest since 2002. Each year, the theme of the Asia-Pacific contest changes depending on the host nation. The 2018 theme is "nem con* shuttlecock throwing," derived from the folk game of the Tay people in Vietnam. Two teams compete for three minutes on a field using two robots — a carrying robot which can be automated or manually operated, and a throwing robot which must be automated. One point is awarded each time the throwing robot successfully receives a shuttlecock from the carrying robot. A successful throw through the lower hoop is worth 10 points, while a toss through the higher hoop earns teams 15 points. Each team's last attempt is with the golden shuttlecock, which if thrown through the higher hoop, is worth 30 points. Additionally, if it lands in the golden cup on the other side of the field, the team achieves Rong Hai (Vietnamese for "flying dragon"), and immediately wins the game.

*
A traditional Vietnamese game where players toss a handmade shuttlecock stuffed with rice seeds and cotton, and decorated with five colorful fringes, through a hoop at the end of a pole standing 15 m high. Often played in spring to pray for a good harvest. 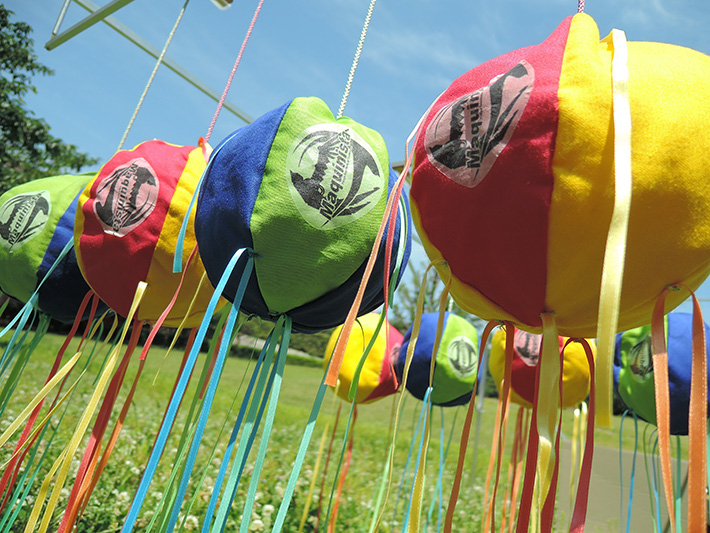 This year, 24 universities participated in the NHK contest. In their first match against Tokyo University of Agriculture and Technology, Team Maquinista achieved Rong Hai in 24 seconds. They then beat Gifu University 62-33, advancing to the final round in sixth position. In the quarterfinal, Tokyo Tech missed their first attempt with the golden shuttlecock, allowing Kyushu University to achieve Rong Hai in 26 seconds. Team Maquinista ended the tournament with 59 points, the best result among the quarterfinal losers. 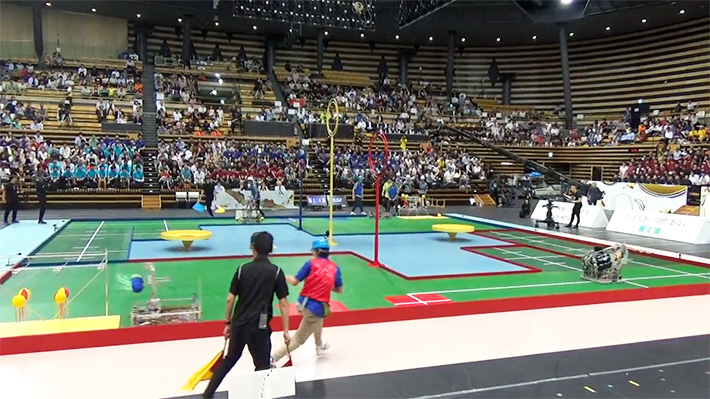 We have been developing our robot and training for the past year, and we were rewarded with a top 8 finish. I think we performed to the best of our abilities, and I am happy about that. We couldn't have done it without the support of many people, and I would like to thank them all.

The final result was disappointing, of course, as we were aiming for victory. However, the technical abilities of our team members improve year after year, and as a result we continue to perfect our robot. We will use this experience to improve our skills further and will aim for victory in next year's competition. A big thank-you to everyone again for their support!

The Society for the Study of Robotics has many members carrying out research in a wide range of fields. Team Maquinista is just one of these groups, but they are one of the strongest in terms of size, achievements, and technical development. Last year, the team won the NHK Student Robot Contest, bringing the whole Society additional support from various directions. They put on another brave performance this year, and as a member of the same society, I feel I have been inspired. I hope Team Maquinista continue to develop their technical capabilities, and passionately aim to win both the NHK and Asia-Pacific contests next year! 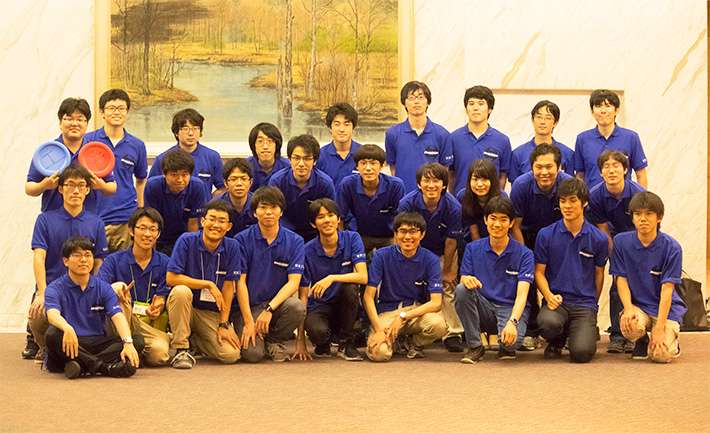 Tokyo Tech's Society for the Study of Robotics, an official student club with 184 members, focuses on the research and development of robotics, including circuit and software technology. In addition to machine tools such as a miller, lathe, and drill press, the club's facilities also support the development of electrical circuits and software for oscilloscopes, computers, and other devices. While many focus on robot creation, club members are free to create whatever they want. Under the guidance of Associate Professor Gen Endo, even students with no prior knowledge can learn design-related mathematical aspects and circuit-related practical methods from scratch.