A colossal breakthrough for topological spintronics

Scientists have developed the world's best-performing pure spin current source1 made of bismuth–antimony (BiSb) alloys, which they report as the best candidate for the first industrial application of topological insulators2. The achievement represents a big step forward in the development of spin-orbit torque magnetoresistive random-access memory (SOT-MRAM)3 devices with the potential to replace existing memory technologies.

A research team led by Pham Nam Hai at the Department of Electrical and Electronic Engineering, Tokyo Institute of Technology (Tokyo Tech), has developed thin films of BiSb for a topological insulator that simultaneously achieves a colossal spin Hall effect4 and high electrical conductivity.

Their study, published in Nature Materials, could accelerate the development of high-density, ultra-low power, and ultra-fast non-volatile memories for Internet of Things (IoT) and other applications now becoming increasingly in demand for industrial and home use. 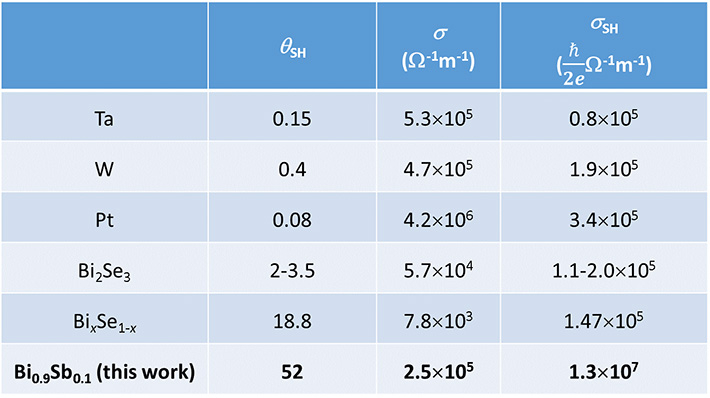 "As SOT-MRAM can be switched one order of magnitude faster than STT-MRAM, the switching energy can be reduced by at least two orders of magnitude," says Pham. "Also, the writing speed could be increased 20 times and the bit density increased by a factor of ten."

The viability of such energy-efficient SOT-MRAMs has recently been demonstrated in experiments, albeit using heavy metals, conducted by IMEC

, the international R&D and innovation hub headquartered in Leuven, Belgium.

If scaled up successfully, BiSb-based SOT-MRAM could drastically improve upon its heavy metal-based counterparts and even become competitive with dynamic random access memory (DRAM), the dominant technology of today.

BiSb has tended to be overlooked by the research community due to its small band gap5 and complex surface states. However, Pham says: "From an electrical engineering perspective, BiSb is very attractive due to its high carrier mobility, which makes it easier to drive a current within the material."

"We knew that BiSb has many topological surface states, meaning we could expect a much stronger spin Hall effect. That's why we started studying this material about two years ago."

The thin films were grown using a high-precision method called molecular beam epitaxy (MBE). The researchers discovered a particular surface orientation named BiSb(012), which is thought to be a key factor behind the large spin Hall effect. Pham points out that the number of Dirac cones6 on the BiSb(012) surface is another important factor, which his team is now investigating.

Pham is currently collaborating with industry to test and scale up BiSb-based SOT-MRAM.

"The first step is to demonstrate manufacturability," he says. "We aim to show it's still possible to achieve a strong spin Hall effect, even when BiSb thin films are fabricated using industry-friendly technologies such as the sputtering method."

"It's been over ten years since the emergence of topological insulators, but it was not clear whether those materials could be used in realistic devices at room temperature. Our research brings topological insulators to a new level, where they hold great promise for ultra-low power SOT-MRAM."

A phenomenon whereby spin angular momentum, but not charge, is transported.

Materials with highly electrically conductive surfaces, but which act as insulators on the inside. Such materials are of great interest in the quest to develop high-performing electronic devices that generate less heat.

A Hall effect for spins originating from the coupling of charge and spin. Pure spin currents can be generated via the spin Hall effect.

An energy range in an insulator or semiconductor in which no electron states can exist.