Dr. Naohiro Yoshida, professor at the Department of Chemical Science and Engineering and principal investigator at the Earth-Life Science Institute (ELSI), has been elected a 2018 American Geophysical Union (AGU) Fellow. 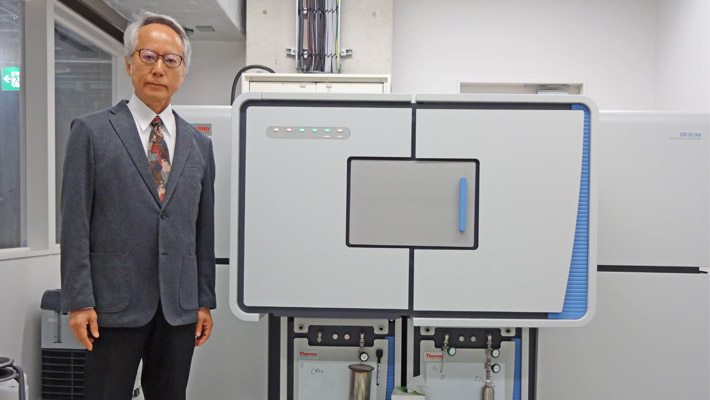 Yoshida with HR-IRMS at ELSI

Established in 1962, the Fellows program recognizes less than 0.1 percent of AGU members who have made exceptional contributions to Earth and space science as valued by their peers and vetted by a committee of Fellows. Yoshida will give a talk at the Plenary Honors Ceremony held in December at the 2018 AGU Fall Meeting in Washington, D.C., which will be attended by some 30,000 members.

Yoshida was elected for being the world's leading biogeochemist and atmospheric chemist studying bio-element cycles through innovative isotope exchanged molecule tracers. He will be the third professor at ELSI to be recognized as an AGU Fellow after Professor Kei Hirose, director of ELSI, and Specially Appointed Professor George Helffrich.

It is an honor to be recognized for our developments of molecular analyses and their application to Earth and space science. While a number of isotope exchanged species (isotopomers and/or isotopologues) were expected to exist in each molecular species, they were until recently difficult to measure quantitatively. We have developed measurement methodologies for this. In other words, we have enhanced analyses of molecules from black-and-white to colorful, and improved the "color" resolutions of molecular species. In doing so, the origin and cycle of molecules can now be analyzed more accurately.

I have been developing this fundamental research idea since I was a university student. I sincerely appreciate the support provided by my supervisors, lab members, domestic and international collaborators, students, and governmental funding agencies. I also would like to thank Tokyo Tech for encouraging me to carry out this work as a professor for the past 20 years.

When I was a principal investigator of a Japan Science and Technology Agency CREST-funded isotopomer project that began in 1996, we tried to construct a high-resolution isotope ratio mass spectrometer (HR-IRMS). It is a wonderful coincidence that, after receiving my second Grant-in-Aid for Scientific Research(S) last year, I am now conducting research at ELSI using a German-made HR-IRMS (pictured) that shares the fundamental design of our spectrometer from two decades ago.

*
This article has been updated to correct a typographical error on October 15.